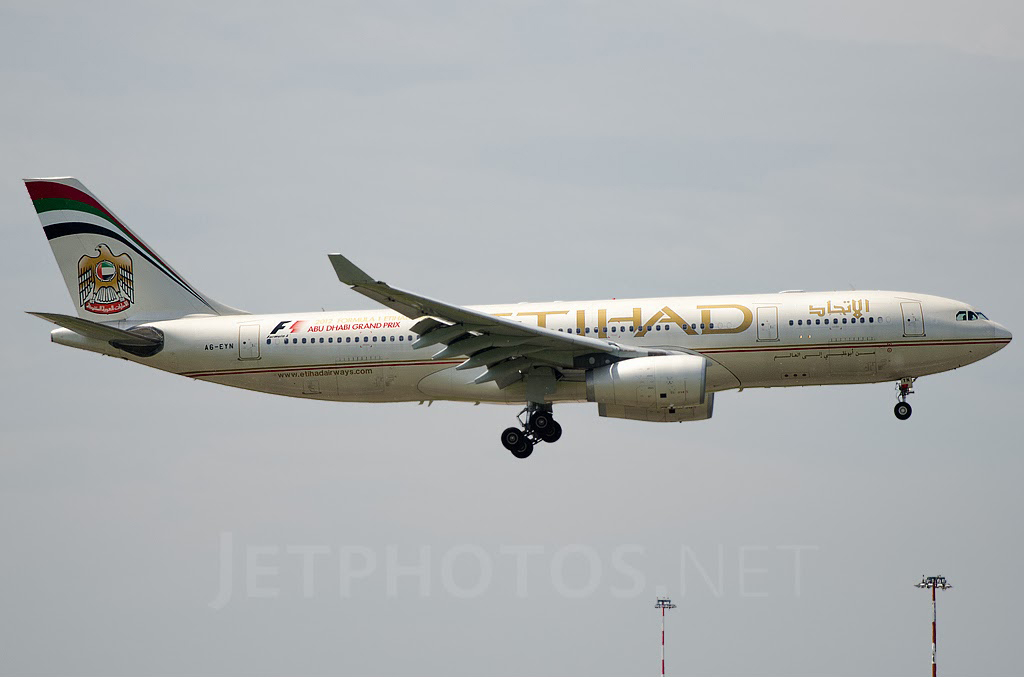 Following up on my flight review of Etihad Airways business class from Mumbai to Abu Dhabi on their A340-600, this review covers my return journey which includes the chauffeur drive service for premium class passengers and a series of very unfortunate delays, though it was not the fault of the airline.

The Etihad chauffeur arrived at my Dubai hotel 30 minutes before my scheduled pick-up time. He gave me a quick call to let me know he had arrived and that I could come down at any time. I found him waiting downstairs with a shiny black Audi A6. The car has water bottles and wet towels for it’s passengers.

Whizzing from Dubai we covered the 130kms to Abu Dhabi airport terminal 1 in about an hour and 20 minutes. On both the arrival and departure trips, I found the chauffeurs courteous and helpful.

After my bags were screened, I checked in at the business class desk. Here I was told that the plane boards from a gate in terminal 3 and not terminal 1 as mentioned in the ticket.

The immigration desk for premium passengers is right behind the check in desks and I was on my way to the lounge in T3 in just a couple of minutes.

A long walk later, I reached the security check in T3 and then the duty free. While T3 is far better than T1, the duty free at Abu Dhabi airport is nowhere near as extensive as the one at Dubai or even the old Doha airport, let alone the new Hamad airport.

The lounge in T3 is a big lounge which is divided into sub sections with desks, sofas, lounge chairs and sit down dinning areas. There is also a large bar through the centre of the lounge.

The lounge also features a full buffet which includes a selection of mezzes, a continental, Chinese and sushi selection. There is also a very large selection of deserts. The food is good and is refilled every 10-15 minutes so it is always fresh.

Upon checking with the steward, I confirmed that Etihad does not use any MSG (mono sodium glutamate) in any of the food served at their lounges at Abu Dhabi. The steward insisted on calling the chef who confirmed it once again for my peace of mind, since I am extremely allergic to MSG.

Overall the lounge is very good and the staff are helpful and efficient.

I left the lounge at the designated boarding time and walked to the gate which was at the end of terminal 3. Here I was informed that we were boarding the aircraft via a bus, and, ironically, the aircraft was parked near T1. So after walking the entire length of terminals 1 and 3, I was being bussed back to my starting point.

While I managed to board the aircraft quite quickly, many passengers, especially the elderly, seemed to be struggling lifting their carry-on bags up the steps onto the A330. The A330 features Etihad’s newer business class and like the older cabin on the A340 (read our review), uses a staggered 1-2-1 seat arrangement with direct aisle access for each seat. Unlike the older cabin on the A340, the A330 cabin felt more open and had wider aisles and better access between the seats. As I took my seat, one of the crew came over and introduced himself and told me he would be attending to me for the flight. He offered me a welcome drink and a hot towel, while we waited for boarding to complete.

The seat is quite good but a little narrow. The seat also reclines into a full flat bed and has more than adequate leg space. The seat also has a useful side table and various nooks to store various things like the headphones, water bottle, etc. After boarding completed, the crew began to take orders for dinner. I was delighted to see the Kim Crawford Sauvignon Blanc from New Zealand, one of my favourites. Push back and taxi was swift and we took off about 10 minutes later.

The food was very good, flavourful and plenty. A confirmed chocoholic I had the thick rich dark chocolate ice-cream. The dinner service was quick and efficient. After dinner, I took a quick one hour nap.

Descent in Hyderabad was quick and the crew were preparing the cabin for landing, when the captain informed us we were diverting to Bangalore due to fog at Hyderabad airport. I told the cabin crew that my final destination was Bangalore and requested them to check whether I could be off-loaded there. They told me they would check with the ground crew when we landed.

The aircraft landed in Bangalore about 40 minutes later and was directed to a remote bay near the cargo terminals. While the aircraft was being serviced, the head cabin attendant was sorting through some paperwork with the ground crew and also checking if I could be offloaded here.

Unfortunately for me the ground crew refused to let me de-board citing customs and immigration rules. While the aircraft was on the ground, the cabin crew offered refreshments. The aircraft left Bangalore after about an hour and a half on the ground.

The flight landed in Hyderabad airport about 40 minutes after leaving Bangalore. Disembarkation was via stairs, again, since all the gates at the airport were occupied.

As soon as I cleared immigration, I headed for the arrivals help desk. Etihad has outsourced their ground operations at Hyderabad to Menzies whose staff I found to be rude, arrogant and very unhelpful. When I informed them that I had missed my connection, they brusquely told me to talk to the station manager, who they were to call. A half hour later, I was still waiting for the station manager and watching the staff deal, if you can call it that, with passengers who had lost bags.

After another 15 minutes, on following up with the Menzies staff, I was told that the station manager has left the airport and that I would have to buy my own ticket to get home. In a very uncaring manner they just point blank said “if I was unhappy I could contact the Etihad office in Bangalore and complain”. At this point I had  enough. I insisted on talking to the station manager and very unhappily the Menzies staff dialled him on his cell phone and surprise surprise, the Etihad station manager was very much AT the airport. It turned out that this was the first he had heard about me missing my connection, and that too a premium class passenger. He immediately instructed the sullen Menzies staff to escort me up to the departure hall, so that he could help me out.

When I got up to the departure hall, there was chaos at the Etihad counters. The crew which normally operates the return flight, had gone over their flight duty time limit (FDTL) thanks to the diversion, and the return flight to Abu Dhabi was cancelled. I truly felt sorry at the rude manner in which passengers were yelling at and man-handling the station manager and the assistant station manager (ASM) as they were desperately trying to rebook the passengers on other flights. Is it any wonder aviation crews cringe at flying to India.

Once the ASM dealt with the madding crowd he was able to come over and talk to me. Within five minutes, I was rebooked onto the very next flight to Bangalore. He repeatedly apologised for the behaviour of the Menzies staff and had I not insisted on speaking with him, he would not know of my situation. It appears the Menzies staff kept me waiting for over an hour having done nothing about my situation.

Over both my flights, service and attitude of Etihad and its staff was very good. While the outgoing A340-600 cabin product was a little dated the return A330-200 was significantly better. I would love to try the airline on a long haul segment and compare it against their India regional service.

However, the experience with the ground handling agent Menzies at Hyderabad left a sour after-taste and it would behove Etihad to explore other options. Just like it is doing to Lufthansa at London Heathrow airport, Menzies is damaging Etihad’s reputation with passengers who have otherwise had a very good experience with the airline.