Has Corona altered aviation as we know it forever?

As of this writing, forty airlines across the globe have announced a complete grounding of their fleet. Others ranging from Emirates and Lufthansa to AirAsia, Qantas and AirFrance-KLM are cutting capacity to as high as 90%. Massive layoffs, bankruptcies and airline shutdowns are likely. All this havoc driven by a particle that is one-billionth of a meter (a nanometer) in size. Namely: the coronavirus.

The coronavirus has been characterized as the mother of all “black-swan” events. A black-swan event is described by author and philosopher N.N. Taleb as having three characteristics. First, it is an outlier and lies outside the realm of regular expectations; second, it carries an extreme impact; and third, folks attempt to explain its occurrence after the fact thereby wanting to make it predictable and explainable. The coronavirus easily meets all of these criteria.

To be sure this is not the first “black-swan” event that has hit the industry. Indeed airlines have faced several shocks before: 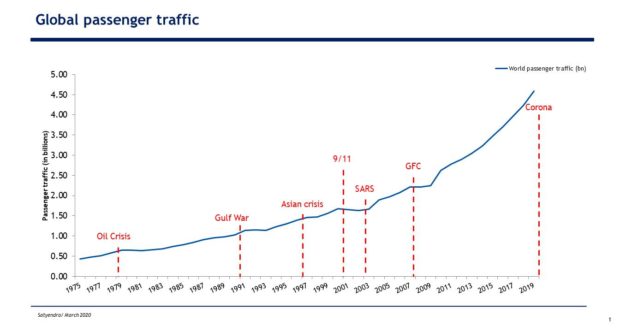 Yet the sheer magnitude of the corona impact has left the industry with very few options.

Demand has not declined; it has evaporated

Usually, the demand shock is limited to a geography and demand has taken time to dissipate. This time though, demand has simply evaporated. It does not help that entire countries are being closed off with extreme travel advisories. Currently, thirty countries have restrictions on foreigners flying in and this number is expected to rise.

For airlines, especially global airlines, their marketplaces have effectively been shut. Even where markets are open, the booking forecast looks bleak. Perhaps best highlighted by the capacity cuts at United Airlines where after a 50% reduction in capacity, the airline still expects only a 20%  – 30% load factor on flights.

Needless to say, no amount of cost cuts will suffice to make up for such an extreme decline in demand. The best option is to drastically cut capacity, ground aircraft and conserve cash. Airlines are doing just that.

For purposes of comparison, one must consider that the Gulf War back in 1990/91 only led to a 7% – 9% decline in passenger demand; the terrorist attacks of 9/11 led to a 12% decline and SARS in 2003 led to a 20% decline. The corona impact has led to a decline that is larger than all of these combined.

In a situation like these airlines that have not paid attention to balance-sheet basics are likely to face a struggle for survival. Already there is intense lobbying for a bailout package for airlines and this could very well be in the range of USD 100 billion dollars or more at a global level. Even so, it will not fully mitigate the impact of losses which IATA estimates at USD 113 billion

Read: How airlines are responding to the Corona virus threat

How a recovery will look

All said and done, eventually, folks will take to the skies again. But there is no denying that the nature of aviation has been changed forever. Whether it is VISA policies, de-risking of supply chains and an uptick in remote-work or the use of technology – the nature of flying is set to change. In the medium term though, labour, capital and people flows will resume. And this effectively will constitute the recovery.

Two key questions are what shape the recovery of demand will take and how long the recovery will take. Each prior “black-swan” has seen a different nature of recovery and different timelines.

The oil crisis of 1979 took three years before global traffic returned to pre-crisis levels; the Gulf-War impact took six months to dissipate (note: this was limited to certain geographies while others were racing ahead); 9/11 took two years before global demand returned to pre-crisis levels, and the global financial crisis of 2008 took six to nine months (again certain geographies and emerging markets helped). 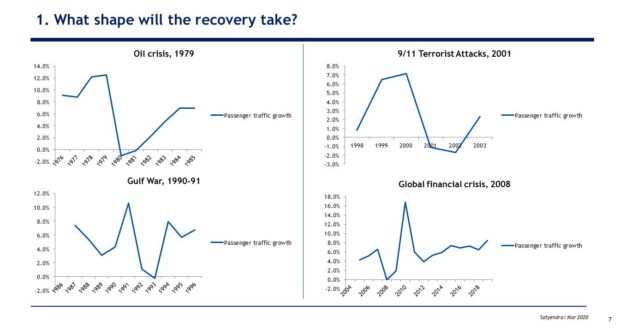 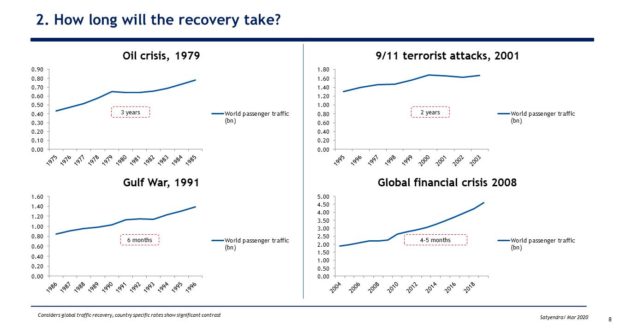 The past may give some ideas but it is worth repeating that the sheer magnitude and speed of the decline as not been seen previously in global aviation.

Even when traffic levels start to stabilize, aviation as we know it will likely be altered forever. A revision of business models and a rethink “high-density” configurations may be on the horizon. The most stressful and unpleasant element of travel, namely “airport security” may get an additional element of “health security”.

“Market-access” that was conveniently doled out to foreign carriers via bilaterals and “open-skies” agreements may be revised and aviation policy changes by countries are likely.

Readers may note that airlines sit at the apex of the aviation value chain. So effectively these changes will permeate across the industry. This includes fluctuation in asset values (mainly aircraft), the revision of technology cycles for aircraft and engine manufacturers. The pressure on airport slots and parking is likely to ease in the medium term because in spite of most optimistic forecasts there will be airline failures.

Other stakeholders in the industry are also working toward mitigation measures. Lessors are reviewing replacement cycles and lease waivers; MRO’s are looking at cost-benefit impacts (keep in mind crude is also at an all-time low) and airports have already started to strategize on how additional charges can be levied on passengers and how the monopoly status can be leveraged further (hopefully the government will see right through this).

Aviation as we know it has been altered forever.