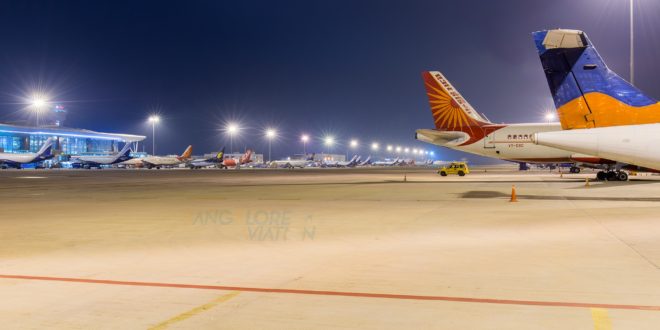 View of part of the ramp at Bangalore Airport at night.

As the airline industry grapples with the largest demand shock in history, India’s skies are closed to all passenger traffic. 650 aircraft are grounded, cash-flows have dried up and pay-cuts and layoffs are the new normal. It does not help that the corona crisis came at a time where the country was also dealing with a banking crisis. Add to that the voluminous aircraft orders of 1100 aircraft on order, a weakening rupee that is down 8% against the dollar in the past fortnight and intense competition. It is almost certain that the government will have to step in and provide a bailout. Failing that airline failures are likely.

Read: Any bailout of airlines must also force structural reforms

Even prior to the crisis not all airlines were profitable

India’s airlines have witnessed profitability in varying degrees in the past five years. But they always got away with the argument: we are in the growth phase and in times the profits will come. But for sustainable success, airlines not only have to position themselves for success but to also ensure to never run out of cash. As has been famously said, “Cash is a fact. Profit is an opinion.”

Carrying excess cash is a luxury that a few airlines have thus access to credit facilities is important. But these have simply not been planned for. And in the current market, banks are extremely reluctant to lend to airlines.  Thus, cash issues.

Everything can’t be swept under the corona umbrella

Even prior to the crisis, India’s airline industry was already grappling with excess capacity and with the quality of cash-flows. This was reflected in the load-factors that were averaging in the mid eighty per cent range (percentage of seats filled), pricing levels and last-minute discounting. International deployment was seen as a logical expansion measure and indeed one saw a raft of announcements with many airlines targeting international flying.

But with several international markets closed, airlines now have very few avenues to disperse that capacity or deploy it profitably. Add to that the situation in the banking sector where lending is severely constrained. It also does not help that the Jet Airways shutdown continues to haunt bankers with exposure of INR 8500 crores.

Add to that the fact that undercapitalization is widespread. A national carrier in a fragile position and propped up by sovereign guarantees further aggravates the situation. More than one Indian airline is behind on lease rent payments and termination notices and unpaid leave notices to staff are already being handed out in an effort to conserve cash.

As it stands, for the industry as a whole, cash – which is the lifeblood of any business – has dried up.

Given the state of airlines and credit facilities, the options to infuse cash are via equity, bank lending or government-funded bailouts.

Equity infusions should be the resort of the first measure but in the current market scenario, these will likely not happen. Because not all parent companies are keen to infuse cash into the airlines at this time. Indeed some may see the crisis as an opportunity to exit the business.

Consequently, the only option for liquidity support is a government-funded bailout.

The challenges of a government bailout

News reports indicate that the government may be considering an Rs. 10,000 crore relief package for airlines. This may include deferrals on payments, waivers on charges and loan guarantees. Yet a government bailout also carries several complexities. Because a bailout is just a measure to tide over the crisis. As such it cannot be used to equalize competition.

Thus the bailout will have to be applied equitably which means that stronger airlines can take the capital to further strengthen their position (while shrinking the airline) while weaker ones are forced to use most of this capital towards continuing operations. Airlines will be kept afloat only to compete ever more vigorously on routes mainly via fare sales and reduced capacity utilization.

Finally, since there is widespread uncertainty on how deeply the demand will fall and how long it will take to revert, a bailout cannot be any guarantee of future success. For the taxpayer (because a bailout is effectively taxpayer money) this has to be thought through.

As it pertains to the airline sector the government may be its most challenging and complex aviation challenge yet.

Satyendra Pandey is an India market expert and has held a variety of roles across aviation. An author and a certified pilot, his most recent book is titled: Dissonant dispatches: Indian aviation’s emergent flightpath.
@spandey16
Previous Video: Ground handlers manually push back a 747
Next Lufthansa retiring some A320s, A340s, A380’s and 747s