I arrived at Dulles on my connecting flight just about three hours and forty minutes before my flight with Etihad. The check in desk had not yet opened and having baggage to check, I had no choice but to wait for it.

About 10 minutes after I reached the desk, the desk agents manned the desks and began checking people in. They checked me in very quickly and I was off through security and heading towards the lounge.

The entrance to the lounge sits flush against the wall at the entrance to the terminal and despite the large entrance, the lack of overhead signage and me staring at a 757 outside the window and walking led to me overshooting it.

After walking half way down the terminal, I realized I had obviously missed it and went back. I found the lounge right there at the start of the A concourse and entered. I presented my boarding card to the associate and entered.

The lounge is open to First and Business class passengers on Etihad as well as Etihad Gold members.

I was the first person to enter the lounge and had a quick walk around to see what was where.

The Etihad Washington lounge was the first of the three lounges the airline has in the US, the others being at Los Angles and New York. The lounge is a reasonably large two floor space with a variety of seating options, mainly leather couches in differing configurations. The center of the lounge has a buffet and also dinning tables, while the end of the lower level has a bar. Also next to the bar were the bathrooms with showers and a prayer room. 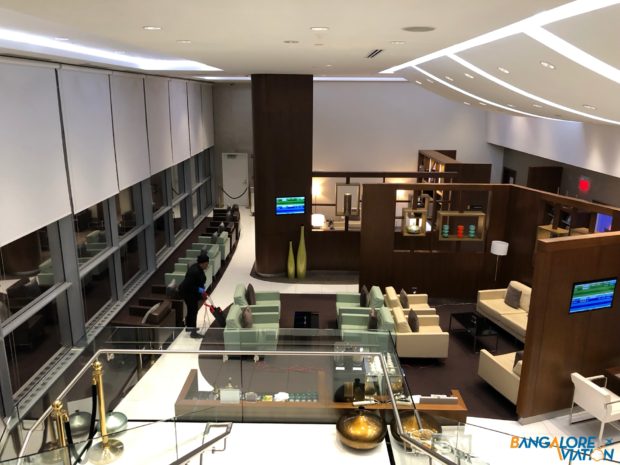 Back towards the entrance was a small business center and a kids play room.

The upper level mainly had more couches and a TV room. The main complaint I had with the lounge were the lack of power points. 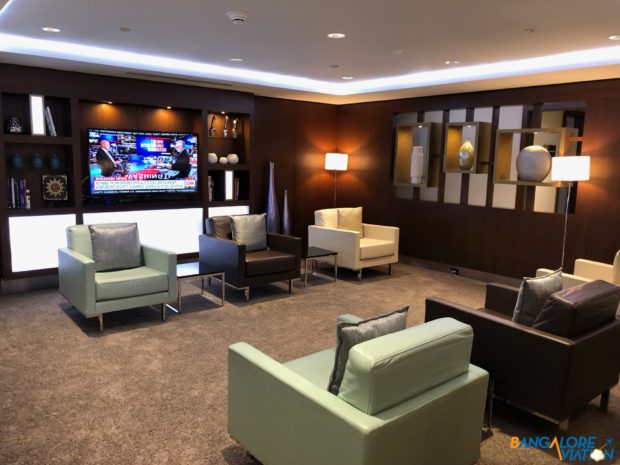 The general decor of the lounge is similar to their business class lounge in Abu Dhabi and the lounge at London Heathrow when it was still operated by Etihad.

The lounge has a buffet spread out in an L along the base of the staircase. The food section has a selection of cold options like fruit, salad, etc and there are three serving dishes with hot options. The food was strictly average at the lounge. Etihad used to have al-a-carte options at its lounges but that has been eliminated as part of the airline’s cost cutting initiatives.

The beverage selection on the other side of the L had a coffee machine, Arabian coffee, some water and soft drinks and a self service wine selection. The bar at the end serves a selection of spirits. However the other Etihad lounges I have visited also served a menu of city themed cocktails which this one didn’t. 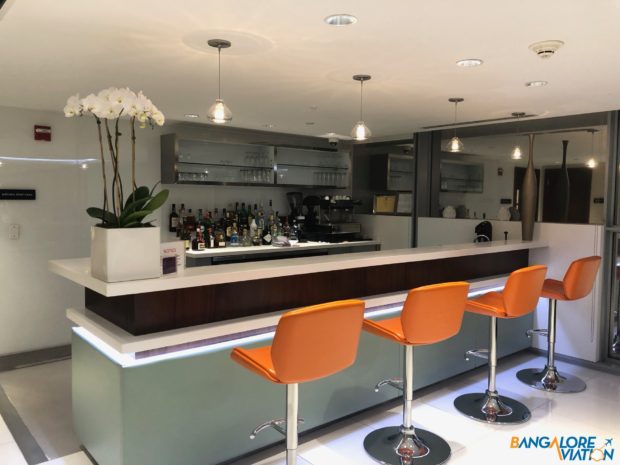 About 15 minutes after the printed boarding time, an agent came up to me and told me that boarding had begun and that I could board at my convenience.

Probably the coolest thing about the Etihad lounge in Washington is that the lounge has boarding gate in the lounge, which leads directly onto the aero-bridge. Etihad’s Washington lounge is quite a beautiful space, while it doesn’t have the airline’s latest design philosiphy the high roof classic design make it an inviting space. However the airline’s cost cutting is apparent in both its food and beverage offerings. The lack of power points was also a bit annoying.

Still considering the airline operates its own lounge for a single daily flight is impressive and being able to board directly from the lounge is pretty awesome.

A frequent flyer for both work and pleasure - Vedant has held elite status on many of the major alliances and airlines. Also an avid aviation photographer, his pictures have been published in and on the covers of many international publications.
@TheVedic
Previous Boeing issues statement on 737 MAX disagree alert. Will enable the alert on all aircraft.
Next Inflight review: Etihad Airways Boeing 787-9: Business Studio: Washington to Abu Dhabi