European airframer Airbus closed out the second month of 2019 with four orders and 103 cancellations.

The orders were for four Airbus A220’s from Pacific Ocean carrier Air Vanuatu.

Cancellations in February included 42 A350s of Etihad Airways and 25 A320s of now-bankrupt carrier Germania. The month also featured 23 cancellations for the A380 after Airbus announced the closure of the program.

Airbus has not yet recorded the cancellation of Emirates 39 A380s indicating it will do so when the deal is finalized, which included the airframers first major order for the year for 30 A350s and 40 A330neos. Airbus delivered a total of 49 aircraft in Febrary 2019 to 33 customers. Airbus delivered a total of 36 A320 family aircraft in Ferbruary 2019. Airbus delivered one A330-200 to it’s defence division for tanker conversion. 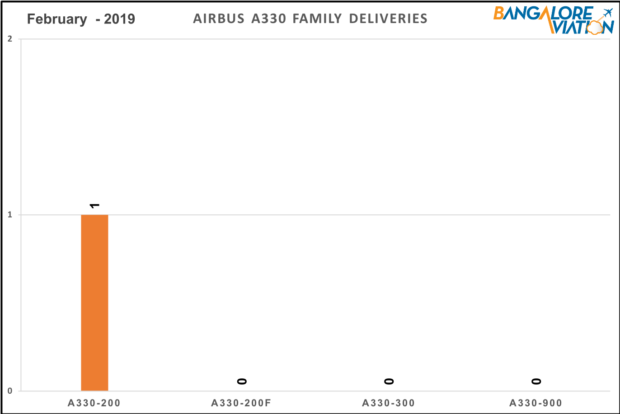 The above charts reflect figures reported by the manufacturer in their orders and deliveries books, it does not reflect orders that have been announced but not finalized.