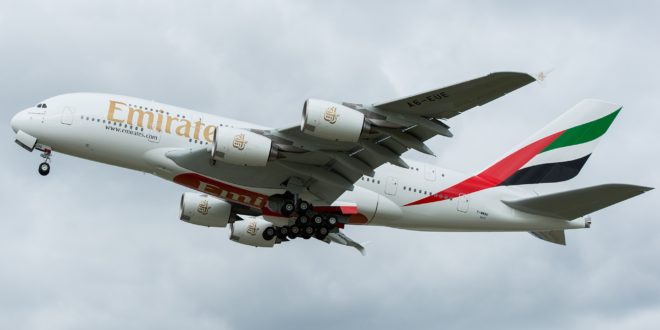 Emirates Airbus A380 F-WWAU. To be registered A6-EUE. Taking off for a test flight.

Airbus A380 future uncertain as Emirates considers A350

European airframer Airbus has confirmed talks with Dubai based Emirates airlines over the carriers A380 orders, with reports that the carrier is considering switching its orders to the smaller A350.

Emirates is the world’s largest operator of the A380, with 109 aircraft and 53 on order. The carrier extended a lifeline to the struggling program in February 2018 by placing an order for 36 aircraft – 20 firm and 16 options.

Read our analysis on why Emirates ordered these aircraft.

However, this deal reached an impasse with Emirates and engine manufacturer Rolls-Royce unable to agree on terms for the engines which are falling short of operational metrics on the carriers existing aircraft.

The carrier is now in discussion to convert its A380 orders to the smaller A350. Reuters is reporting that Airbus was looking “extremely seriously” at setting the timetable for a shutdown but said no decision had been taken. And that outgoing CEO Tom Enders is unlikely to leave the issue unresolved before the end of his term.

Airbus said in a statement that it “confirms it is in discussions with Emirates Airline in relation to its A380 contract. The details of Airbus’ commercial discussions with customers remain confidential.”

Aside from the current A350 order, Airbus will be looking to ensure future aircraft orders from the largest of the Middle-Eastern carriers. Emirates has no orders for wide-body aircraft with Airbus beside the A380. It had ordered 70 A350s in 2007 which was cancelled in 2014. In 2017 Emirates committed to ordering 40 Boeing 787-10’s from Boeing with whom they also have orders for 150 777Xs.

While Boeing will undoubtedly be negotiating to firm up the 787 order, both Airbus and Rolls-Royce will be aggressively working to fill the gap at the Middle-Eastern giant instead of more Boeing and their GE powered aircraft.

A frequent flyer for both work and pleasure - Vedant has held elite status on many of the major alliances and airlines. Also an avid aviation photographer, his pictures have been published in and on the covers of many international publications.
@TheVedic
Previous Indigo to open Bangalore Airport’s first MRO facility
Next An overview of India’s commercial aviation fleet and orders – 2019