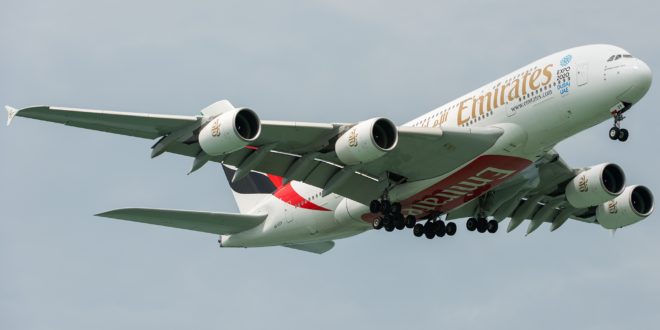 Analysis: What drove the Emirates to buy more Airbus A380?

In the weeks leading upto the Emirates A380 order there was much speculation on the future of the A380 program and if this glorious aircraft would continue to be produced. As the largest operator of the fleet type Emirates was central to the debate.

Things came to a pass when at the Dubai Airshow Emirates ordered 40 Boeing 787-10 Dreamliners valued at US$15.1 billion dollars at list price. It seemed that the A380 program was all but doomed. Yet, on 18 January, Emirates went ahead and ordered 20 more A380s with 16 options, helping the program continue. So what drove the decision?

The A380 – a unique aircraft in its capabilities

The A380 currently is the largest passenger jet. What the A380 provides is sizeable capacity via an average of 500 seats per airplane. These are usually split into 10 – 16 first class cabins, 70-80 business seats and the balance in Economy. Other variations are possible including a full economy configuration where the aircraft can pack upto 700 seats.

Its range of 8,500 nautical miles (how far it can fly) and performance (how much does it cost to fly) are competitive but are specific to long-range flying. Independent estimates point to seat mile cost of US$ 0.07 (variable cost only). This is reflected in the operators of the fleet type (see chart: A380 operators globally) and routes it is flown on – which tend to be long-range routes.

Additionally, a fact often forgotten, the A380 is a very comfortable aircraft. Its sheer size, quietness and design lend to a product preferred by passengers.

The A380 helps Emirates deliver on its strategy

Emirates is the largest operator of the A380. This is facilitated both by its airport (Dubai terminal designed specifically to cater to the A380) and also its network strategy. What the A380 provides Emirates is sizeable capacity via an average of 500 seats per airplane. These are usually split into 14 first class seats, 70 business seats and the balance in economy. This also helps deliver on Emirates strategy where it can fly in passengers to its Dubai hub and connect to its international network. Emirates’ often stated vision is to connect any two points in the world via Dubai.

For instance, Emirates flies six daily flights from London Heathrow to Dubai. Thus, per year it is putting in 1.9 million seats to bring in passengers to its hub from London (who may otherwise have flown British Airways). Similarly, Emirates flies the aircraft to several global hubs such as Singapore, Bangkok, Hong Kong pulling in passengers to its own Dubai hub and connecting them across the globe.

Additionally, with the A380 Emirates is able to create product differentiation. The first class suites are already stuff of legend. Its sky-bar is another innovation. And business travellers – that are critical to any global airlines success — simply love the product.

Challenges faced by Emirates using the A380

Post the global financial crisis of 2008, air traffic showed a sharp rebound and Emirates soared to ever greater profits. However, with oil prices collapsing from 2014 onwards, coupled with the lacklustre growth in Europe and North America, Emirates saw a marked decline in its premium traffic. Against this backdrop, its competitors namely Qatar Airways and Etihad continued to add capacity and build products that were at par with Emirates – capturing a sizeable chunk of premium traffic from Emirates.

On the non-premium traffic, low-cost carriers continued to rise and Chinese carriers started to tap into traffic flows that were traditionally routed via Dubai. For instance, Indian passengers headed to Australia or the US West Coast.

If this were not enough, geopolitical tensions further exacerbated these challenges with restrictive bilateral agreements and inability to secure market access to countries like Canada and Germany.

Against this backdrop Emirates needed drastic capacity reduction and reallocation but this was not possible as the smallest fleet type it had was the Boeing 777 which still carries 300 odd passengers and the operating economics simply cannot compare to a narrowbody. Not having a narrowbody also limits the cities Emirates can fly to and this was a challenge that was recognized (thus the code-share with FlyDubai)

The declining premium traffic, advent of the low cost revolution, geopolitical tensions and tepid economic growth begs the question why Emirates would order more of the A380s. This was driven by 5 key reasons as outlined below:

As air traffic continues to grow, airports across the globe are increasingly saturated. Emirates is betting that the A380 will help it overcome slot constraints as the only way to capture more passengers will be via larger aircraft which will enable it to offer frequency and schedules for more travellers.

Aircraft require spare parts and the end of production of a fleet type usually drives up the demand and cost for spares. Additionally, the ends of a program means that the manufacturer shifts focus to other fleet types thus innovations on the existing fleet become minimal which can be detrimental. The additional order by Emirates will ensure this is not the case.

Finally, talent, and especially engineering talent, on the A380 is in high demand. However, in case the aircraft was phased out the talent also would see a shift. This is a point often missed.

All aircraft carry with them a residual value – which is how much the aircraft is worth if it comes off lease or is sold in the market. For Emirates, if the A380 program ended, it would result in a crash in residual values as demand for the fleet type would have gone down. This has balance sheet impacts which then affect valuation and other financial drivers.

Ironically the order ensures production stability for its current fleet as well. This is critical to Emirates growth plans including its upcoming shift to the new Dubai World Central airport. Once production stability is established, Emirates can now continue to push Airbus for a more fuel efficient and re-engined A380 and/ or modifications to the program.

The continuation of production also means secured jobs at production facilities. This lends itself to politics and an era of vox populi (voice of the people) where nationalism is growing especially across Europe. While purely speculative, it is not beyond rationale that the new order had with it discussions built around additional market access.

In summary, for the entire aviation community the A380 order by Emirates and the impact of the continuation of the program is a welcome sign. It is perhaps an aircraft ahead of its time but will prove its mettle as traffic continues to rebound, cargo markets see an upward trend once more and the demand for the A380 product continues

The writer(s) are external experts. Bangalore Aviation may not agree with the views expressed by the author. Authors prefer to remain anonymous for a variety of reasons but mostly since they are not authorised by their employers to express their views publicly on the record.
Previous Analysis: Indigo third quarter FY2018 results. A leader in every way.
Next Boeing unveils first 737 MAX 7. Delivery to Southwest Airlines next year.