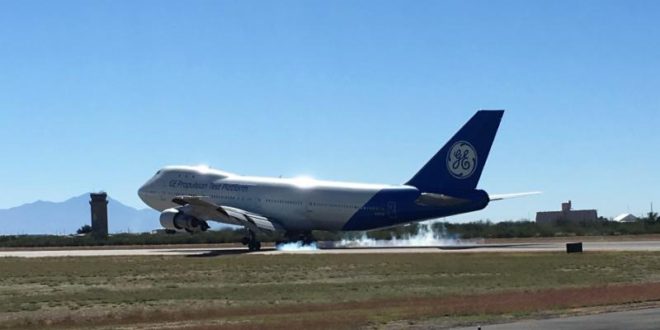 Engine manufacturer General Electric (GE) has completed the final flight of it’s original 747-100 flying testbed. The aircraft N747GE was the oldest active 747 in the world. It was the 25th 747 to roll off the line in October 1969 and was delivered to PanAm in March 1970 as Clipper Ocean Spray.

GE acquired the aircraft in 1992 when it was around 23 years old. The aircraft was then converted to a test bed which involved significant modifications, including removing seats, strengthening the left wing and tail for flight testing and installing data systems.

The first engine to be tested on the aircraft was the iconic GE90. The aircraft was involved with development of more than 11 distinct engine models and 39 engine builds, including widebody engines likes the GE90, GEnx and the Engine Alliance GP7200, CF34 engines for regional jets, narrow body engines like CFM56 and LEAP, and the Passport for business aviation. GE flew the plane on its final test flight on January 25, 2017.

The aircraft flew it’s final flight from GE’s Flight Test Operation in Victorville, California to the Pima Air & Space Museum in Tucson, Arizona where it will be displayed. Through it’s life it flew a total of 90,000 hours and 19,251 cycles.

Interview with the pilots of the 747 testbed

The original testbed has been replaced by another 747, a -400 that GE acquired in 2010 from Japan Airlines. GE converted the aircraft into what it calls the Propulsion Test Platform (PTP). Powered by GE CF6-80C2 engines, GE has stated that the new PTP offers better capabilities and improved integrated systems compared to the older flying test bed. The PTP has flown missions for the LEAP and GE9X engines.

A frequent flyer for both work and pleasure - Vedant has held elite status on many of the major alliances and airlines. Also an avid aviation photographer, his pictures have been published in and on the covers of many international publications.
@TheVedic
Previous SpiceJet Q2FY19 results analysis
Next Video: Airbus ACJ320neo completes it’s first flight