On our flight back from the US, we were connecting through Chicago O’Hare airport. Chicago is one of the airports which feature American Airlines new flagship lounges. 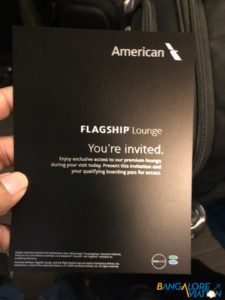 The lounge was located very close to the gate we arrived at and we were quickly at the lounge entrance. After getting our boarding passes scanned at the concourse level, we went up to the Flagship lounge on the second floor. Here a lady collected our lounge invitation and allowed us into the lounge.

The second checkpoint is since the AA Admiral’s club is on the third floor and uses the same elevators.

We had originally planned to spend only a couple of hours at this lounge but ended up spending abound five and a half hours instead.

When you enter this lounge you are greeted by a great view across the apron. The lounge itself is one large rectangular room separated into smaller sections with varied seating options. 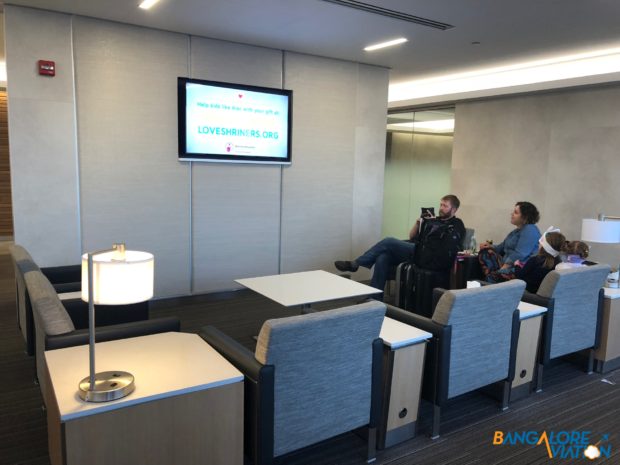 We entered and went to the right where we passed a set of ticket desks – I would spend some time here in a couple of hours.

We took some seats near the window and got some water. The lounge has little counters in various sections with water, small snacks, coffee and mini bars.

All of the seating areas have ample power points – which I think is one of the single most important points of a modern lounge. Another great feature of this lounge is the view of the AA apron and taxiways.

One end of the lounge is dedicated to a large buffet and sit down dinning area. There is a huge selection of food available at the lounge and you can easily have a full meal here before heading for your flight.

The food was good and flavorful and was replenished reasonably frequently. This area of the lounge also had the main self serve bar which again featured a large selection of alcohol.

Our flight to London was supposed to leave at 22.10. We would have a two hour ten minute connection at London onto Bangalore. About an hour after we reached the lounge our flight was showing as delayed by 30 minutes.

When I checked with one of the agents at the agent ticket desks, she told me that she would come and call me when the flight was ready to board. She came at around 22.10 and told us the flight was going to start boarding soon.

So we made our way to the boarding gate which was at the end of the pier. At the gate the gate crew announced that the boarding was delayed again since they found another technical problem.

As soon as they announced the delay, I saw a couple of people quickly bolt back to the lounge before it closed. We also followed.

After we got back to the lounge, I had come to the conclusion that there was absolutely no way we were going to make our connection at London.

I went up to one of the four agent desks (for which I have to give AA credit – three of the four desks were manned despite it being after the closing time of the lounge), and explained that we would miss our connection. The agent quickly pulled up our booking and looked up alternates. She then offered me an option on a United / Lufthansa combo via New York and Frankfurt which would have been the fastest alternate to current booking.

I did not want to go off OneWorld and sacrifice the mileage since I was also trying to retain my status. So I passed on the United option. After some brainstorming with her, we realized that pretty much every option we took would result in around a day delay. She started searching for flights the next day.

After some more searching, she found a flight on Qatar but was unable to get two seats on the Doha to Bangalore leg. After discussing the options with her further, I decided to take the original flight that night to London. She told me that AA would put us up at a hotel for the night in London and we would continue to Bangalore a day later.

While I wasn’t particularly happy with the final solution, I was very impressed with the AA agent. She first offered me the fastest alternate even though it was not on a partner airline. Following which she looked up every option I and her could think of and was ready to rebook me onto the Qatar flight even though it was at the highest fare class. Unfortunately she couldn’t get two seats or I would have taken that option.

The new AA flagship lounge at Chicago is great. It ticked all the required boxes with good food, power points, connectivity, etc. The view from the lounge is great and you can easily spend a couple of hours looking out the window.

The staff at the lounge really make the lounge great – the agents were always helpful and pleasant which really helps make a good lounge.