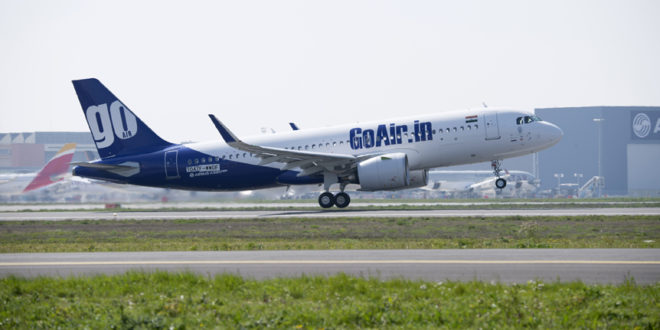 Analysis: GoAir signs MOU with Airbus for another 72 A320neos. Doubles order to 144.

GoAir is the third operator of the new aircraft, globally, after Germany’s Lufthansa, and India’s IndiGo. It has taken delivery of two A320neos as of date.

While engine selection is not immediately known, but there are indications the airline will continue to choose the Pratt & Whitney PurePower Geared Turbo Fan (GTF) engine. Original launch customer Qatar Airways has refused to take delivery of A320neos citing technical problems with the engine. However, GoAir’s CEO Wolfgang Prock-Schauer indicated the airline is “very happy” with the GTF engine. “It is performing as per our expectations” he said.

From one perspective, it is heartening to see another airline follow the same ‘big order’ approach as domestic leader IndiGo. Surely GoAir got favourable prices and also gets ahead in the delivery queue. After years of caution, it is also heartening to see GoAir become aggressive on its expansion. Their planned international destinations like Iran, CIS countries, etc., shows we can expect the same maverick thinking on international routes, as on their domestic. On the long term the fuel efficient neos will gain in value and deliver increased savings as oil prices increase.

However, on the flip side, it appears that Indian carriers are betting big on the expected growth of the Indian air travel market. They are scrambling over themselves to grab their share of the expected pie. IndiGo has 430 aircraft on order, now GoAir. Spicejet has 42 Boeing 737 MAX and is reportedly mulling another order. Jet Airways, Air India, Tata-SIA Vistara, and AirAsia India have yet to announce their fleet plans, but expect some fireworks.

Eight years on, these airlines seem to have forgotten the twin shocks of the 2008 global meltdown which almost saw the demise of the Indian airline industry. India is an extremely price sensitive market, and GDP growth will not remain high, nor will oil remain low. As in 2008, the moment these crucial factors change, passenger demand will plummet. We cannot even imagine the bloodbath thanks to the extreme overcapacity.

A electronics and automotive product management, marketing and branding expert, he was awarded a silver medal at the Lockheed Martin innovation competition 2010. He is ranked 6th on Mashable's list of aviation pros on Twitter and in addition to Bangalore Aviation, he has contributed to leading publications like Aviation Week, Conde Nast Traveller India, The Economic Times, and The Mint (a Wall Street Journal content partner). He remains a frequent flier and shares the good, the bad, and the ugly about the Indian aviation industry without fear or favour.
@BLRAviation
Previous Qatar Airways to buy 10% stake in LATAM
Next Boeing announces orders for 737, 787 and 747-8 on day 2 #FAS16

Go Airlines has called a press conference on July 18th, 2019. The note to press …