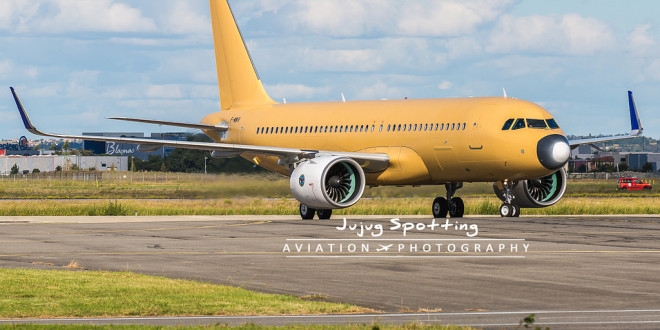 IndiGo A320neo MSN6720. Copyrighted photo used with permission. Do not use or reproduce.

Airbus CEO confirms IndiGo as second operator of the A320neo

As launch customer Deutsche Lufthansa took delivery of its second Airbus A320neo, Airbus CEO Fabrice Brégier has reportedly told Air Transport World that IndiGo, India’s largest domestic carrier, and largest Indian operator of the A320 family aircraft will be the next operator of the new fuel-efficient plane.

The magazine website reports “He [Brégier] confirmed to ATW that India’s IndiGo will be the next customer to take delivery of the A320neo. ATW understands that Qatar Airways is now slated to become at least the third A320neo operator.”

The story also reports Pratt & Whitney president Robert Leduc saying, the American engine manufacturer is working on certain hardware changes and a software update for the PW1100G engines which are expected to be largely completed by April. Until those changes are done, the engine has to idle for three minutes following engine start-up before the aircraft can start taxi.

This issue has caused delays in the delivery of the neo and affected the fleet expansion and renewal plans of many airlines, including IndiGo and GoAir which has 430 and 72 aircraft ordered, respectively.

Last week Airbus chose to perform the first flight of the A321neo, the largest and most ordered variant of the neo family, with the CFM LEAP engine and not the PW1100G.

IndiGo opts for 189 seats on its neo

Sources have indicated that IndiGo will most likely opt for the 189 seat cabin layout for its A320neos based on the Airbus Space-Flex V2 design. The current two rear lavatories are shifted to occupy half of the rear galley space, freeing up the current space for more seats. The photo gallery below helps explain the layout.

A electronics and automotive product management, marketing and branding expert, he was awarded a silver medal at the Lockheed Martin innovation competition 2010. He is ranked 6th on Mashable's list of aviation pros on Twitter and in addition to Bangalore Aviation, he has contributed to leading publications like Aviation Week, Conde Nast Traveller India, The Economic Times, and The Mint (a Wall Street Journal content partner). He remains a frequent flier and shares the good, the bad, and the ugly about the Indian aviation industry without fear or favour.
@BLRAviation
Previous Jet Airways Q3FY16 analysis – good results, structural challenges remain
Next Bharat Forge supplies first titanium forgings to Boeing