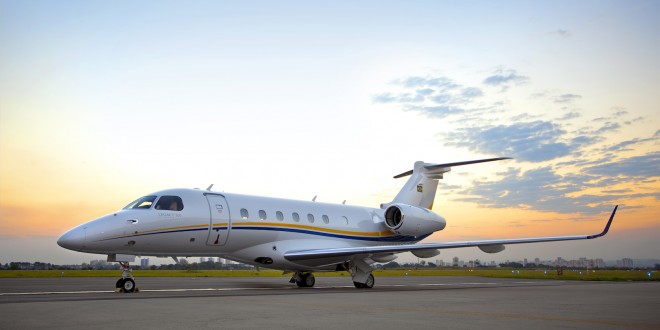 The first Legacy 500 to be delivered. Embraer Image.

Last week Brazilian airframer Embraer delivered the first Legacy 500, the company’s new midsize executive jet. The launch customer is a Brazilian company which took delivery of the aircraft at a ceremony at Embraer headquarters, in São José dos Campos, Brazil.

“The entry into service of the Legacy 500 is yet another important achievement by our Company, Our teams developed a revolutionary product, which symbolizes our commitment to offer our customers the most innovative solutions in the industry.”

See the interior of the luxurious Legacy 600.

The Legacy 500 has a six-foot flat-floor cabin, which is comparable to those of some aircraft in the super midsize category. Eight club seats may be berthed into four beds for complete rest in a cabin altitude of 6,000 feet. The in-flight entertainment system consists of a high definition video system, surround sound, multiple audio and video input options, a cabin management system, and three options for voice communications and connectivity.

The Legacy 500 is capable of flying at 45,000 feet and is powered by two Honeywell HTF7500E engines, the greenest in their class. Taking off from airfields as short as 4,084 ft, the Legacy 500 has a range of 3,125 nautical miles (5,788 kilometers) with four passengers, including NBAA IFR fuel reserves, which enables it to fly nonstop from São Paulo to Caracas, Los Angeles to Honolulu, Teterboro to London, Moscow to New Delhi, Jakarta to Sydney, Dubai to Zurich, and Beijing to New Delhi.

A frequent flyer for both work and pleasure - Vedant has held elite status on many of the major alliances and airlines. Also an avid aviation photographer, his pictures have been published in and on the covers of many international publications.
@TheVedic
Previous Video: Cargolux Boeing 747-8F pilot does a ultra-low height wing wave
Next Garuda Indonesia announces order for 50 Boeing 737 MAX 8s