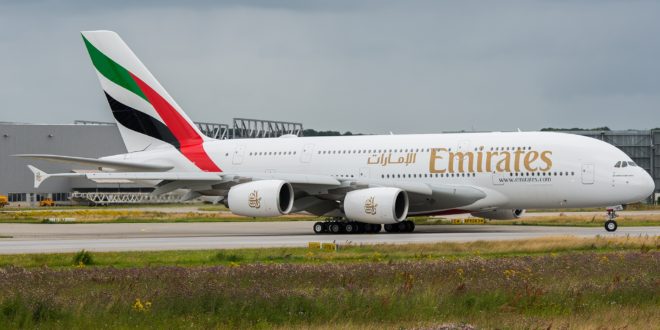 Satyendra Pandey May 27, 2019 Airbus, Emirates Comments Off on Emirates and the impacts of the A380 phase-out

With the production of the Airbus A380 ending 2021, airline enthusiasts the world over are wondering if there will be a replacement aircraft that is as awe-inspiring. The end of the program is also interesting as it contradicts the fact that airports are increasingly constrained and indeed airlines will have to devise strategies to overcome this.

Yet, the impacts are disproportionate to Emirates as it is the largest operator of the fleet type flying a hundred and ten A380s. Five ways in which Emirates will be impacted are:

1. Change in the product offering

With the A380, Emirates is able to offer seats and products to match varying levels of demand. The standard configuration was fourteen first class seats, seventy business class seats and on average four hundred and fourteen economy seats. Features like a shower in first class and the on-board lounge in business added to the overall product proposition.

As these aircraft go out of service, Emirates will start to gradually replace these with A330s, A350s and 777-8/9. While the configuration is yet to be determined overall Emirates will have less real-estate in the skies.

In a recent interview, Emirates’ CEO has already indicated that this poses a challenge as the replacement aircraft for the A380s are not as large. This will force a change in the product offering.

As the replacement aircraft for the A380s are not as large, essentially there will be a reduction in capacity. While the configuration for the A330s, A350s and 777s is not firmed up at this point, industry sources indicate that one is looking at a twenty to thirty percent reduction in overall seats.

Note: numbers are illustrative and taken as an average

The reduction in capacity comes with lower cost as highlighted by the lower weight of the aircraft (the maximum takeoff weight) and also two engines as opposed to four engines. This again may give a profitability boost to Emirates assuming that demand does not taper. However, demand is dynamic and it seems that Emirates is betting that premium economy will take off. Towards this, several aircraft are being reconfigured with premium economy seats. Whether this pays off is yet to be determined.

A point often missed is that the A380s are not as good for cargo capacity compared to the 777s. This is both a function of design and the passenger volumes. For the A380s ramp personnel often state that the aircraft cubed out. This means that the aircraft ran out of belly space before reaching the weight limit.

Add to this the fact that the overall cargo capacity was also lesser than aircraft such as the 777 and the A330. Thus replacement of these aircraft is actually good for cargo capacity on routes.

The phase-out of the A380s also affects the overall Emirates network strategy. Indeed as confirmed by their CEO, an extensive review of the network is underway. The core strategy that till now has been based on connecting cities and towns across the globe with one stop in Dubai. As a part of this strategy Emirates flew the A380 into busy competitor hubs pulling in significant traffic to Dubai that then connected to onward destinations.

For instance an analysis of the top seven routes to dominant hubs that were serviced by the A380 are as below:

With a twenty to thirty percent reduction in capacity, the ability of Emirates to pull traffic will be impacted. That said, as long as it continues to pull the high-yield traffic, the impact of the capacity reduction may actually be positive. Interestingly barring Hong Kong all the above airline hubs operate their respective airline’s A380s, as the A380 is phased out without additional flights, it will mean a reduction of capacity across the board.

Some of the routes such as those to Frankfurt are capped by bi-lateral access. If the restrictions were removed almost certainly Emirates would mount additional A380s to these airports.

Finally, the A380 continues to be an aircraft preferred by travelers. So as these are phased out gradually, demand on the flights flown by the A380 may go up. That is if of four frequencies, one is serviced by an A380 while others use other equipment, there may be higher demand for the A380 flight.

Eventually, as the product differentiation in terms of aircraft goes away, travelers may switch to other airlines because of other preferences such as terminals, frequent flier programs or direct flying.

The A380 is also a very expensive aircraft to outfit, as new cabin products are released, they will definetly feature on the airline’s newer aircraft, while retrofitting the A380 especially towards the later end of its life may not be financially viable. This would further affect premium class demand as passengers would gravitate towards aircraft with the latest product.

Overall the phase-out of the A380 is unfortunate. But given the lack of orders and the limited ability of airlines to make the economics work with such a large airplane, it was perhaps inevitable. On a more positive note, the industry trend in aircraft manufacturing is one where there will be an additional focus on speed as opposed to size. And it is likely that Emirates will once again lead the charge.