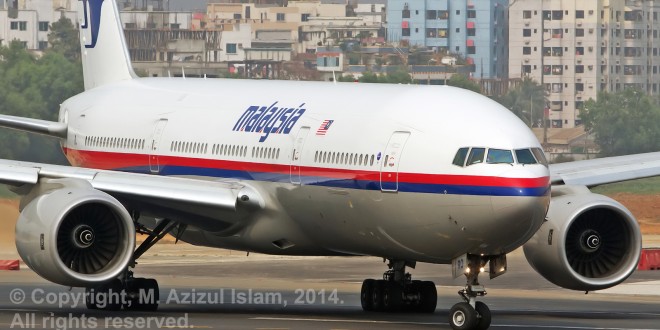 Malaysia Airlines Boeing 777-200ER registration 9M-MRO taken at Dhaka, Bangladesh on 11-Feb-2014. This aircraft went missing while performing flight MH370 from Kuala Lumpur to Beijing with 239 persons on board. Photo copyright M. Azizul Islam. All rights reserved. Used with permission. Click on the image to enlarge.

Vedant Agarwal May 30, 2018 Malaysia Airlines Comments Off on Ocean Infinity calls off search for #MH370

The disappearance of Malaysia Airlines flight MH 370 is arguably the world’s most mysterious commercial aviation disaster. The aircraft which was carrying 239 passengers from Kuala Lumpur to Beijing disappeared on 8th March 2014.

A multi-national search effort over many years costing hundreds of millions of dollars was called off in 2017.

Earlier this year the search was resumed by a US seabed intelligence company called Ocean Infinity. They took up the task of finding the wreckage of MH370 within 90 days, on a “no-cure, no-fee” basis. That basically meant that if they did not find the plane, they would get nothing. While if they did they would get paid up to $70 million.

When it was first announced – many believed that they were quite confident about where the plane was to take up an expedition like this which would cost who knows ho much. But sadly yesterday Ocean Infinity has announced that they have called off their search for the aircraft.

“I would firstly like to extend the thoughts of everyone at Ocean Infinity to the families of those who have lost loved ones on MH370. Part of our motivation for renewing the search was to try to provide some answers to those affected. It is therefore with a heavy heart that we end our current search without having achieved that aim.

We are most grateful to the Government of Malaysia for entertaining our offer and affording us the opportunity to recommence the search. The commitment that the new government in Malaysia has made to prioritising finding MH370 was very good to hear.

We want to thank the team onboard Seabed Constructor who have worked tirelessly and all the many companies, organizations and individuals whose support, guidance and advice were invaluable. The staff at the ATSB whose dedication to finding the plane has been unwavering deserve our particular gratitude.

Whilst clearly the outcome so far is extremely disappointing, as a company, we are truly proud of what we have achieved both in terms of the quality of data we’ve produced and the speed with which we covered such a vast area. There simply has not been a subsea search on this scale carried out as efficiently or as effectively ever before.

We sincerely hope that we will be able to again offer our services in the search for MH370 in future.”

The company has indicated that they would like to search for the aircraft again in the future. However it is a sad day for everyone who was hoping to see them succeed.

A frequent flyer for both work and pleasure - Vedant has held elite status on many of the major alliances and airlines. Also an avid aviation photographer, his pictures have been published in and on the covers of many international publications.
@TheVedic
Previous Indigo announces 20 flights from Bangalore, Chandigarh and more
Next IndiGo re-imposes fuel surcharge on domestic flights

Malaysia Airlines is fitting its long distance Airbus A330-300 fleet with a new business class. …