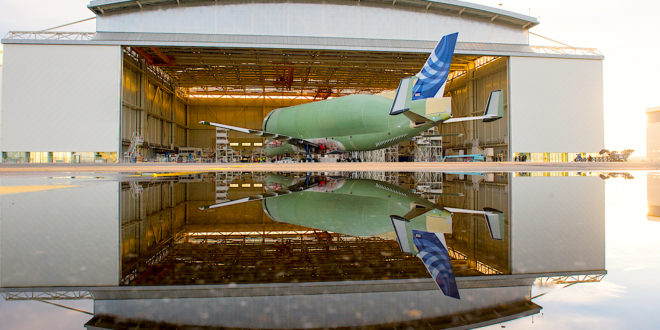 January 11, 2018 Comments Off on Airbus rolls out first of its next-gen super transporters – the BelugaXL 57 Views

European airframer Airbus has rolled out the first of its next-generation super transporters, the BelugaXL at its main assembly line in Toulouse, France. Named after the white whale it represents, the BelugaXL will succeed the current fleet of the A300-600ST (super transporter) Beluga, which is based on the A300 airframe.

The BelugaXL programme began in 2014 and Airbus will build five of these aircraft.

History of the super transporter

As the name “super transporter” suggests, Airbus uses the Belugas to transport parts and sub-assemblies from supplier plants across Europe, to its main assembly lines in France, Germany and Spain.

Ironically, Airbus began its operations using an aircraft from its main competitor, the Super Guppy, which was based on the Boeing C-97J/377 Stratocruiser.

Boeing too has its own modified cargo aircraft, the 747-409LCF (large cargo freighter) also called the Dreamlifter, which transports parts from across the globe to Boeing assembly lines.

The new BelugaXL is based on the best-selling Airbus A330 twin-jet platform. However, as pictures show, the Beluga bears little resemblance to the passenger or cargo version of its A330-200 base airframe. Compared to the current generation Beluga, the XL is six metres longer, one metre wider and carries six tonnes more of payload. It will be able to carry two complete A350 XWB wings at a time, compared to the one carried now.

The first structurally complete airframe of the new plane will now be fitted with engines before it commences static ground tests, followed by dynamic testing and then flight testing in the middle of this year.

The aircraft undergoes extensive tests which ensure each system functions as intended. Hydraulic jacks at specific points simulate flight loads and stress the airframe in addition to full-scale copies of joints between the new upper bubble and A330’s lower fuselage. The data gathered is used for flight testing and type certification.

The second A330 airframe to be converted into a BelugaXL has commenced assembly and integration in Toulouse. The assembly time should be shortened by about two months, thanks to lessons learnt with the first BelugaXL assembly.