After getting off my last flight from Dallas (Read the review here.), I quickly went through security at Doha and headed to the Al Mourjan Business Lounge. I’ve written about this lounge before so I will not write about it again.

I left the lounge late since I was stuck on a call over the lounge wi-fi and didn’t want to move. However at some point I realized that if I waited for the call to get over I would miss my flight and left the lounge. After leaving the lounge I rushed to the gate – which as luck would have it was one of the last gates in the A pier. 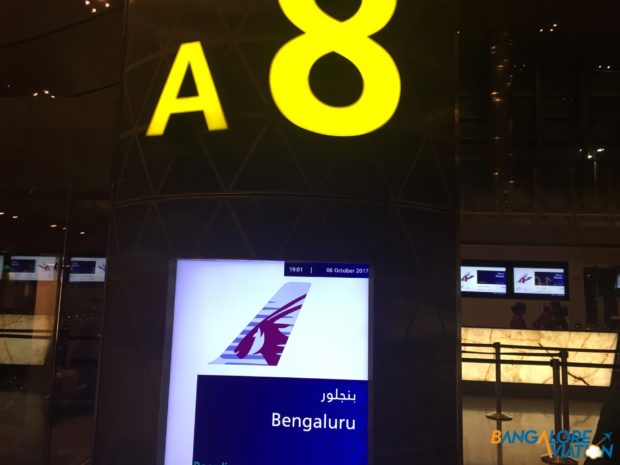 On boarding the aircraft, I was pointed to my seat by the attendant at the door.

I quickly stowed my luggage and got settled in my seat. Luckily for me the seat next to mine was empty.

The cabin product on most of Qatar’s 777’s is ancient. This product is really old. The seats are forward facing in a 2-2-2 configuration. Each seat relines into a reasonably long flat bed.

While the configuration on this plane is really old – I am actually a fan of this particular cabin product. The seats have large amounts of space between rows which just gives you the feeling of openness when you sit down. However that does come at the cost of privacy, which is almost non existent with these seats.

The seat also has very little in the way of storage aside from one large bin under the screen which you can’t reach while sitting in the seat.

Some of the pictures of the cabin are from previous trips 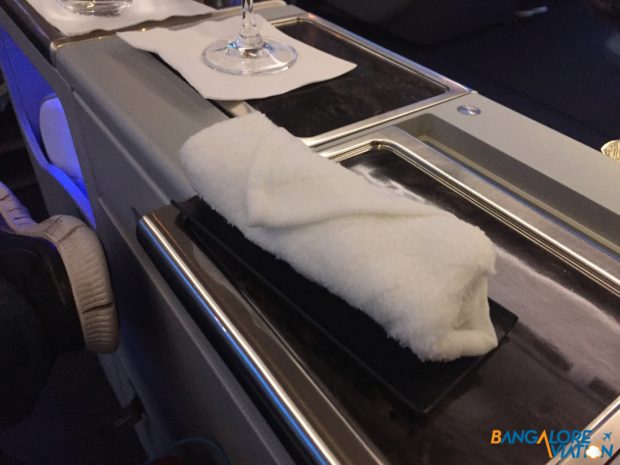 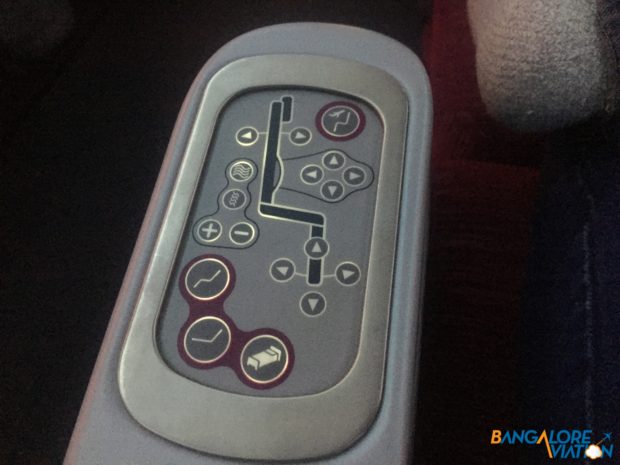 As I took my seat, a cabin attendant Rohit came and introduced himself and took my drink order. He quickly returned with my drink order and a menu. 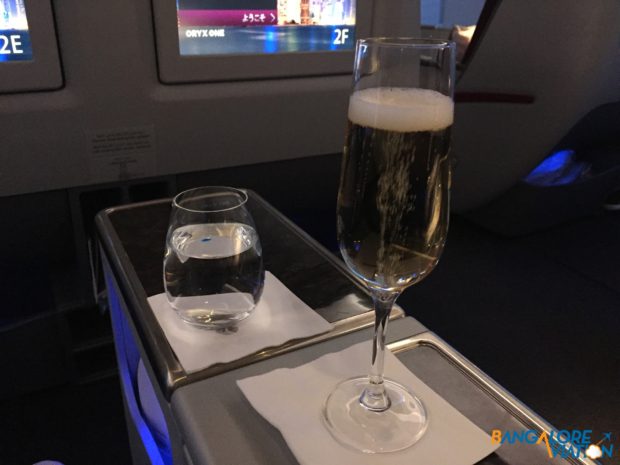 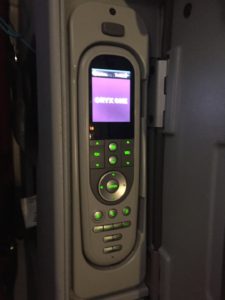 As the plane prepared for departure, I looked through the content on the IFE. The IFE on the 777 has a big enough screen that is controlled through a controller at the seat. The interface is a little clunky by today’s standard but is easy to use.

The Oryx system as Qatar calls it has a large variety of content.

A particularly nice thing about not having a neighbor on the 777 is you can switch on the map on seat next to yours. So you always have the map handy without having to exit your movie. 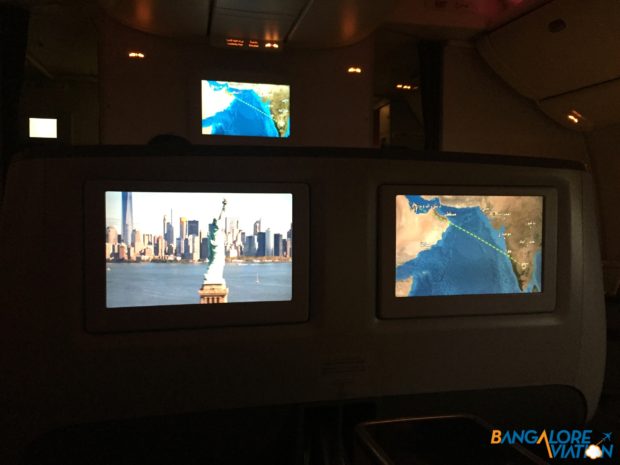 The flight pushed back about 20 minutes behind schedule. A little after takeoff Rohit came back and took my order. Unfortunately I was forced into a Indian meal since the western options were all seafood. After taking my order, he got me a mint and lime juice. 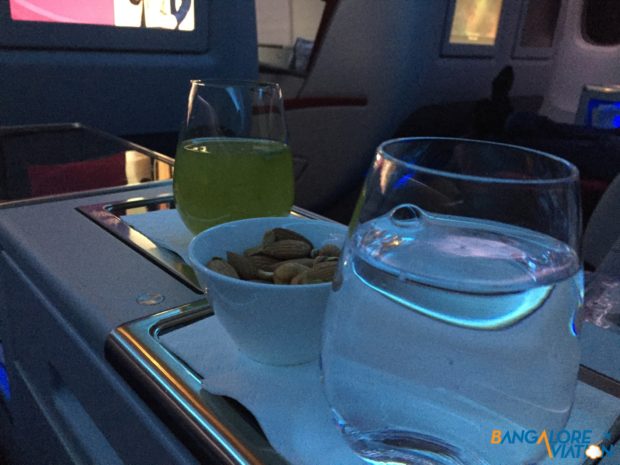 The meal service began about 45 minutes after takeoff. The soup and lamb kebab were ok. The biryani was very good even by restaurant standards – it was a perfect balance of flavour and spices. The mango moose dessert was average. Overall this meal was not as good as the one on the flight from Dallas. 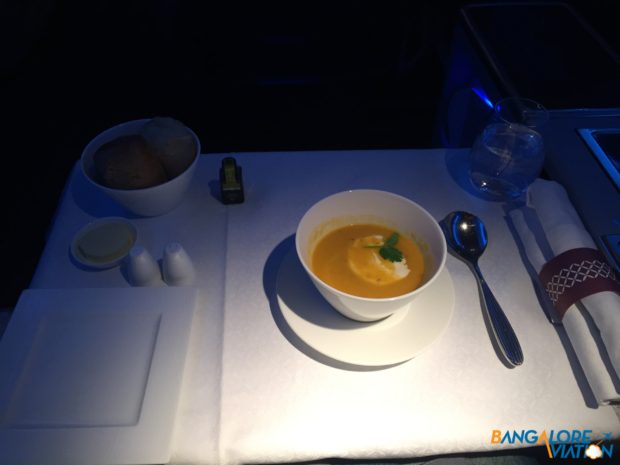 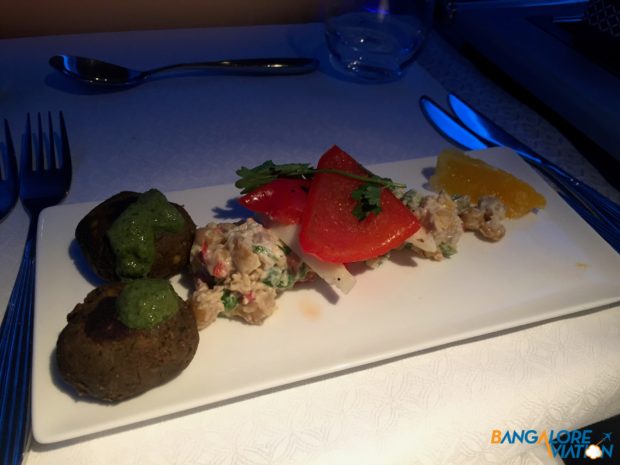 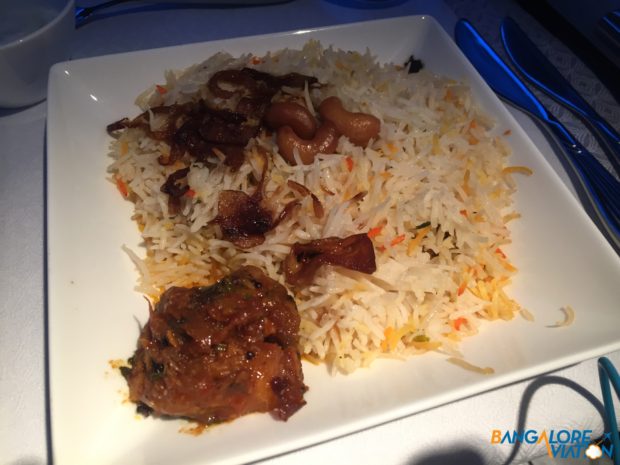 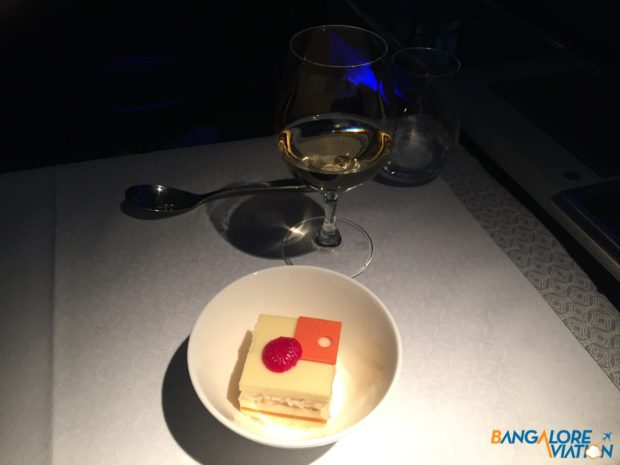 The rest of the flight proceeded without incident and we landed at Bangalore on time.

The cabin product on the 777 definitely isn’t the latest or greatest product from Qatar but is still a competent product even in today’s market. Qatar has already introduced it’s new Q-suite product on the 777, so this product shouldn’t be around for more than a couple of years more.

Service on both legs was great as usual. While Qatar has definitely improved their food and have also introduced a meal selection service on certain flights out of Doha, they still have a little room to improve on their meals.