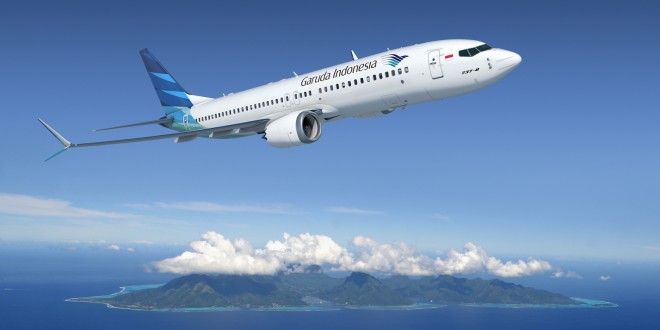 A CGI of a Garuda Indonesia Boeing 737 MAX 8. Boeing Image.

US Airframer Boeing has announced an order for 50 737 MAX 8s, valued at $4.9 billion at current list prices from Indonesian flag carrier Garuda Indonesia. The airline will purchase 46 737 MAX 8s and will convert four existing orders of 737-800s to 737 MAX 8s.

The order was previously accounted for in Boeing’s order book, attributed to an unidentified customer.

“The 737 MAX 8 represents a bright, efficient future for Garuda Indonesia, This order helps continue our commitment to offer the people of Indonesia and Southeast Asia the most comfortable, most efficient air travel in the region.”

Garuda Indonesia currently operates 77 Boeing 737s. The new order gives the airline the flexibility to update its fleet as the market demands.

“The 737 MAX will be a great addition to the Garuda’s fleet, It will build on the strong tradition of service that Garuda Indonesia has established with the 737 family. This order demonstrates Garuda’s trust in Boeing and a strong commitment to operate the most fuel-efficient single-aisle airplanes in the market today and in the future.”

A frequent flyer for both work and pleasure - Vedant has held elite status on many of the major alliances and airlines. Also an avid aviation photographer, his pictures have been published in and on the covers of many international publications.
@TheVedic
Previous Embraer delivers it’s first Legacy 500
Next British Airways to start Boeing 787 service to Chennai