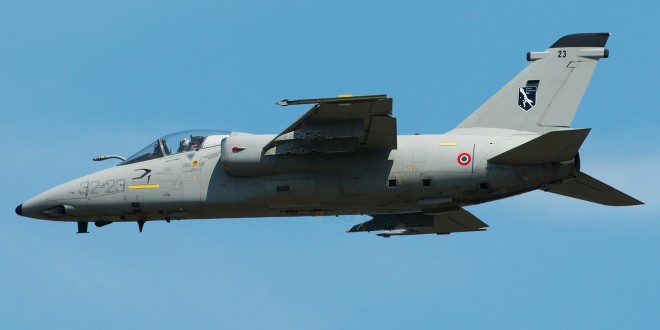 Through the lens: Italian Air Force at RIAT 2014

Following up on last week’s article introducing RIAT 2014, this week we are focusing on the Italian Air force (IAF) at the show. The IAF had the most number of air displays of any of the visiting air forces at the show. The flying display of the IAF included all of their combat jet aircraft, their famous Alenia C-27J Spartan and the Frecce Tricolori.

First up we have the Eurofighter Typhoon. The IAF Eurofighter was the show opener on all three days of RIAT. The Eurofighter is the product of the Future European Fighter Aircraft program, which was a multinational effort between the UK, Germany, France, Italy and Spain. Due to disagreements over both project authority and operational requirements, France left the consortium to develop the Dassault Rafale.

The Eurofighter was designed to be a highly agile aircraft capable of being a highly effective dogfighter. Later versions of the aircraft have become increasingly well equipped to undertake various ground attack roles. It is powered by two Eurojet EJ200 after-burning turbofan engines. The Eurofighter was one of the two aircraft shortlisted for India’s Medium Multi-Role Combat Aircraft (MMRCA) procurement but lost out to the Dassault Rafale.

Next up we have the AMX International AMX A-11 Ghibli it was built by AMX International, an Italian-Brazilian joint venture composed of Alenia, Embraer and Aermacchi. It is designed to execute ground attack, close air support and reconnaissance missions.

The AMX is capable of operating at high subsonic speed at low altitude and if necessary, from bases with poorly equipped or damaged runways. Interestingly and unusually for a fighter of it’s time period no attempt was ever made during the design process to make the AMX a supersonic aircraft. The AMX is powered by a single Rolls-Royce Spey 807 turbofan engine.

Then we have the Panavia Tornado IDS fighter-bomber. The Tornado was built Panavia Aircraft GmbH, a consortium consisting of British Aerospace (then British Aircraft Corporation), MBB of West Germany, and Aeritalia of Italy. It was born out of the Multi Role Combat Aircraft (MRCA) program. The participating nations all had requirements that were so diverse, it was decided to develop a single aircraft that could perform a variety of missions that were previously undertaken by a fleet of different aircraft. The Tornado was built in three main variants the Tornado IDS (interdictor/strike) fighter-bomber, Tornado ECR (electronic combat/reconnaissance) air defense suppressor and the Tornado ADV (air defence variant) interceptor aircraft.

The Tornado is equipped with a variable-sweep wing and is powered by two Turbo-Union RB199-34R Mk 103 after-burning turbofan engines.

Last up we have the Alenia C-27J Spartan . The C-27J is a medium-sized transport aircraft. It is an advanced derivative of Alenia Aeronautica’s G.222, with the engines and glass cockpit of the Lockheed Martin C-130J Super Hercules. It also features an updated cargo compartment to increase commonality with the C-130J.The C-27J shows a 35% increase in range and a 15% faster cruise speed over the G.222.

The C-27J is powered by two Rolls-Royce AE2100-D2A turboprop engines.

The C-27J had a very impressive display routine which starts with the pilot performing a very steep takeoff and is followed by a series of barrel rolls and loops which is a sight to see being performed by this type of aircraft. The display ends with a rapid descent followed by a short landing and the aircraft reversing off the runway.

Next week we will be featuring the Italian Air force’s aerobatic display team, the Frecce Tricolori, so please check back soon. As always please share your views in a comment below. (We always like to hear what you think of our photo essays.)