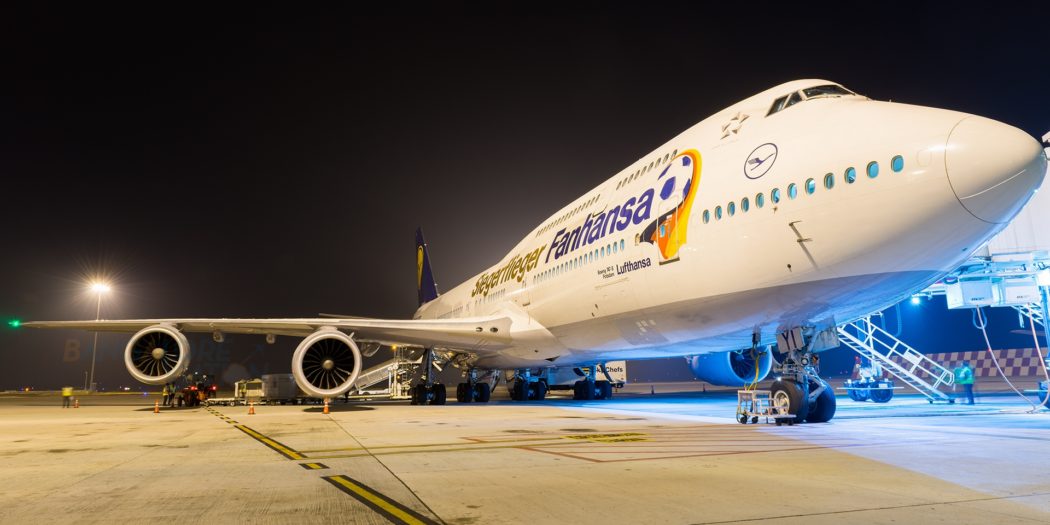 Last time I was airside at Bangalore airport, I tried to shoot some video along with the pictures you usually see on BangaloreAviation.

I tried a time-lapse of the turn-around of Lufthansa’s Boeing 747-8i D-ABYI service between Frankfurt and Bengaluru Kempegowda airport.

On a time-lapse certain movements which are very slow in real life get magnified. Enjoy watching how the wings of the aircraft lower as it’s refueled (see the wing-tips near the airfield lights.)

Lufthansa is the largest operator of the Boeing 747-8i and flag carrier of Germany where soccer reigns supreme.

In 2014, the airline painted a special ‘Fanhansa‘ livery on some of its aircraft to celebrate the FIFA world cup being held in Brazil. When Germany won the world cup, the German team flew on D-ABYI back to Germany. This aircraft was honoured by applying another title to its fuselage; ‘Siegerfliger‘ the ‘winner’s airplane‘.

Before the win. Only Fanhansa

Let us know how you liked the video in the comments below.

A frequent flyer for both work and pleasure - Vedant has held elite status on many of the major alliances and airlines. Also an avid aviation photographer, his pictures have been published in and on the covers of many international publications.
@TheVedic
Previous DGCA directive grounds several IndiGo and Go Air A320neos
Next AirAsia to add flights to Imphal and Pune