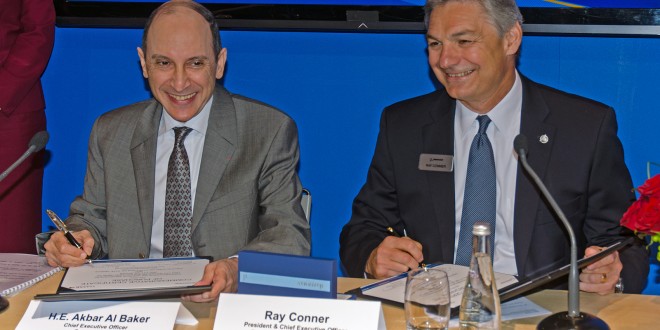 Speaking to Bangalore Aviation when asked about his airline’s growth plans for India considering the airline has used up its existing bi-lateral capacity, Al Bakar said

“I have great confidence in the new prime minister. He is a business-man and realises the role of aviation in building the Indian economy and creating jobs. He is committed to turning the Indian economic story around and should achieve his goals providing the existing operators do not interfere.” “The aviation sector is very important for tourism and foreign airlines like Qatar Airways brings millions of tourists to India. This was ignored by the previous government due to vested interests”

Al Baker was in an unusually ebullient mood, full of smiles, and answering questions with a level of frankness that exceeded his well known direct style.

When asked about protectionist moves by some European countries, he promptly shot back “You mean Germany”. In a very frank disclosure Al Baker said

“Governments around the world realise that orders from the middle-east airlines like Qatar Airways are creating hundreds of thousand jobs in their countries. They would not like to impede this job creation and economic benefits just trying to protect a small portion of their economy that is being driven mostly by union pressure.”

“Only two airlines of Europe are trying to use protectionism. They themselves are shedding jobs because of the cost structures and the high cost base imposed on them by the unions. This high cost is preventing them from investing in infrastructure and fleet renewal.” “It’s been donkeys of year since they placed any aircraft order.” “Our CASK [cost per available seat kilometre] is half that of European airlines. This is not our fault and we should not be blamed. It is a sign of excessive unionism and poor management at these airlines.”

“If we three [Qatar, Emirates, Etihad] are prevented from flying to their countries, who will bring in the millions of tourists we carry every year to them?” “Do you think the governments of India and China will just let European carriers expand indiscriminately? Who will fill the void if we three withdraw flights?”

“Governments should not entertain protectionist tendencies with are being bought by vested interests.” “Look at the Qatar Airways example. Today Qatar Airways contributes over 11% of Qaatr’s GDP”

Qatar Airways is 777X launch customer along with Emirates

At the signing ceremony, Qatar Airways finalised an order confirming 50 Boeing 777-9X aircraft originally committed to at the Dubai Air Show last year. The order is worth $18.9 billion at list prices, but airframe manufacturers traditionally give substantial discounts for large orders. The airline also announced an additional commitment for 50 777-9X purchase rights which if exercised would take the order value up to $37.7 billion.

Qatar Airways will use the confirmed 50 777-9X as fleet replacement for its existing 777 fleet with deliveries starting in 2020. The additional 50 purchase rights will be transferred to the leasing arm the airline intends to commence shortly.

In addition to the 777-9X, Qatar Airways announced a confirmed order for four Boeing 777F freighters, with options for four more. This commitment is worth $2.4 billion at list prices. The airline did not release the expected delivery dates of the freighters and Boeing declined citing company policy not to comment on delivery dates.

When asked about the on-going spat with Boeing rival Airbus, Al Baker said Qatar Airways was committed to purchasing 10 A380s and will stand by its commitments. He re-iterated that while Qatar Airways had a reputation of being a tough customer, it was also recognised of being a customer that is firm in its commitments. It takes it time signing, but once it signs on the dotted line, it honours its orders without re-negotiating.

However, Al Baker, did express his disappointment that there is no engine competition on either the Boeing 777X or the A350 programs.

The airline chief though give one disappointing news. On the 777-9X, the airline will abandon its nine-abreast economy class seating with an industry leading width of 18.9 inches in its current 777s to go with a 10-abreast seating like gulf competitors Emirates and Etihad. Ray Connor explained the new 777X fuselage was widened slightly but even with this improvement, seat width will reduce to an expected 17.3 inches to 17.5 inches. While Al Bakar took pains to explain this would not alter the passenger experience, we fail to see how reducing seat width by 1.5 inches will not.