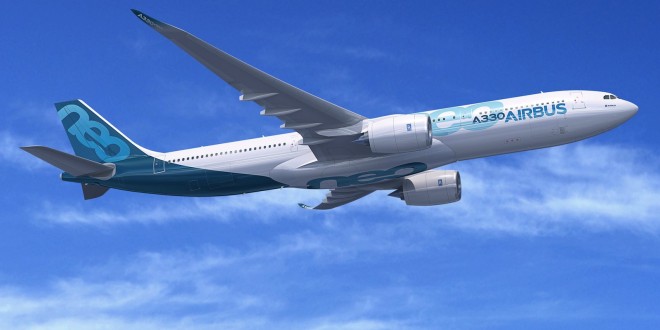 After much expectation, early this morning, European airframer Airbus has launched the A330-800neo and A330-900neo (new engine option) in ongoing its attempt to answer to the Boeing 787 Dreamliner.

Deliveries of the A330neo are expected commence in the last quarter of 2017.

The upgrade of one of the world’s most popular medium-range twin-jets, the A330neo will build on the new technologies used for the airframer’s newest product, the A350 XWB, including the curved winglets, an increased wing span and new engine pylons. The company claims a 14% benefit in fuel consumption and an increase in range of 400nm. The flight deck will also be upgraded though it would behove the company to keep the new airplane as common as possible to the existing A330.

More details are expected later today when the company briefs the media at the ongoing Farnborough air show 2014.

In a move popularised by competitor Boeing, Airbus will use a single source for the new engines, the Rolls-Royce Trent 7000.

The new A330 will seat 10 additional passengers, and Airbus will retain the same 18 inch seat width in economy class compared to the 17.2 inches in the Boeing 787 Dreamliner family. The hard cabin product will be upgraded with new in-flight entertainment options.

The announcement leaves in doubt the future of the Airbus A350-800 the smallest member of the new A350 XWB family, which has suffered from a lack of orders.

A electronics and automotive product management, marketing and branding expert, he was awarded a silver medal at the Lockheed Martin innovation competition 2010. He is ranked 6th on Mashable's list of aviation pros on Twitter and in addition to Bangalore Aviation, he has contributed to leading publications like Aviation Week, Conde Nast Traveller India, The Economic Times, and The Mint (a Wall Street Journal content partner). He remains a frequent flier and shares the good, the bad, and the ugly about the Indian aviation industry without fear or favour.
@BLRAviation
Previous Video: Boeing 787-9 flight demo for the Farnborough air show 2014
Next In Pictures: Farnborough Day 1, Red Arrows open the show