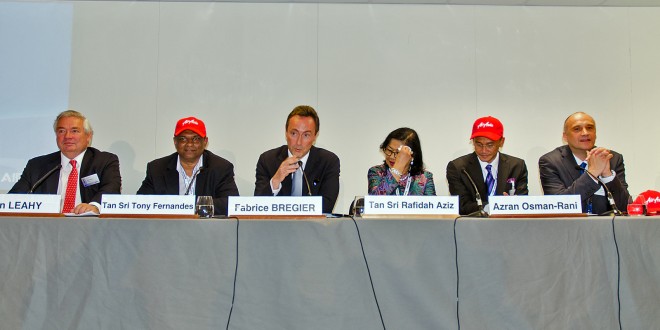 Airline will be first to receive delivery in 2017

“We could not imagine an air show, at least for Airbus, without a signing ceremony with AirAsia”

Malaysian low-cost long haul carrier AirAsia X, an affiliate of low-cost carrier AirAsia became the launch customer of, and the first airline to order, the newly launched Airbus A330neo when it signed a MOU (memorandum of understanding) with the European airframer for 50 A330-900neo aircraft worth $13.8 billion at list prices.

The airline will receive the first aircraft when it enters service currently expected in 2017.

Tony Fernandes the founder of the AirAsia group, has been a major proponent of the A330neo, pushing Airbus to develop the aircraft for quite some time.

With hugs and kisses all around, when asked about how felt signing this order, Fernandes told Bangalore Aviation

It feels cool. It feels like I’m still in a dream. It’s great to see one’s wishes fulfilled and I thank everyone at Airbus for doing it.”

However, it is not clear how many of AirAsia X’s existing A330 orders will be converted to noes, nor is it clear exactly how many aircraft out of the agreed upon 50 will the airline actually take delivery of.

Fernandes went on to explain that AirAsia X is more of a medium-haul airline, not a long-haul one. Initially the airline will focus on intra-Asia routes and possibly expand to the central Asian CIS states like Kazakhstan, etc.

When asked about resuming flights to London, AirAsia X CEO Azran Osman-Rani told the assembled media that the airline will consider Europe since the A330-900neo can do 13 hour flights but was not in the near future.

AirAsia India will scale up by end 2014

Fernandes indicated the AirAsia India was “going good” and will scale up to at least six planes before end 2014. Responding about the competition faced, he said “No market in the world is easy” “Words are easy. We have to deliver.” Poking fun at AirAsia’s competition saying tongue-in-cheek “we face a lot of animals” (in reference to Lion Air and TigerAir), but we are rated the best, referring to the best low cost carrier award his airline just won”.

Outlining the potential coverage AirAsia X could achieve with the A330neo, the AirAsia chief said India and Japan could become vital cogs in AirAsia’s plans for global coverage. From Japan AirAsia X Japan could fly to the US west coast and down to Latin America, while from India, all of Europe and Africa could be covered.

Industry stalwarts including major aircraft lessors firmly believe that Indian carriers grossly under-serve the Indian international passenger market which forces traffic to foreign carriers, all this thanks to the lack of a comprehensive and cohesive aviation policy and myopic efforts to protect national carrier Air India and certain select Indian carriers which have the needed political clout.

Video of the signing ceremony