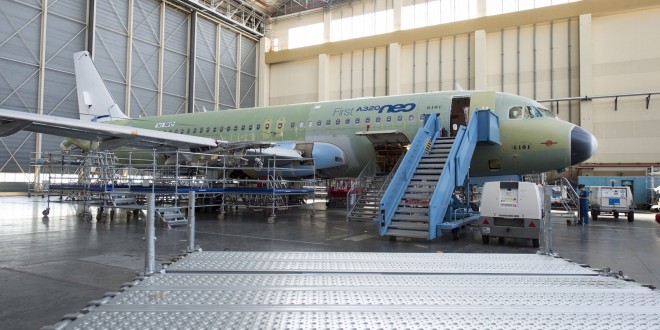 The first aircraft began its final assembly last month, with the join of the forward and rear fuselage sections. Next, major structures were mated of the aircraft. Wings made at Broughton, UK; vertical tail made inStade, Germany; horizontal stabiliser tailplane made in Getafe, Spain; engine pylons made in St. Eloi, France; and wing flaps made in Bremen, Germany.

The main flight-test instrumentation equipment is also installed on the aircraft. Across the Atlantic, Pratt & Whitney is manufacturing the first set of PW1100G-JM PurePower geared turbo fan engines in the United States for delivery to Airbus in the coming months. The A320neo expects its first flight later this year, with first customer deliveries in 2015.

A electronics and automotive product management, marketing and branding expert, he was awarded a silver medal at the Lockheed Martin innovation competition 2010. He is ranked 6th on Mashable's list of aviation pros on Twitter and in addition to Bangalore Aviation, he has contributed to leading publications like Aviation Week, Conde Nast Traveller India, The Economic Times, and The Mint (a Wall Street Journal content partner). He remains a frequent flier and shares the good, the bad, and the ugly about the Indian aviation industry without fear or favour.
@BLRAviation
Previous SriLankan Airlines becomes first oneworld member from Indian sub-continent
Next Doha’s Hamad airport commences operations