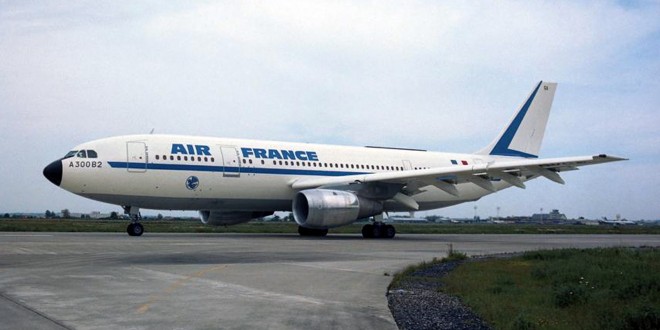 May 10, 1974, European airframer Airbus Industrie delivered to launch customer Air France, the world’s first twin-engined wide-body commercial jetliner, the A300. The delivery was also the very first delivery of an aircraft by the fledgling manufacturer.

At a time when wide-body meant three or four engines, Airbus took the risk of developing a two engined widebody aircraft. To reduce risk and make the aircraft more appealing to the largest aviation market, the United States, the A300 used General Electric CF6 or Pratt & Whitney JT9D engines, the same engines used by the McDonnell Douglas DC-10 and the Boeing 747-100 the “original” jumbo jet.

Indian Airlines was the world’s first domestic airline to operate the A300, specifically the A300B2-1C, A300B2-101, and the A300B4-203 powered by General Electric CF6 engines. Since many Asian civil aviation regulators did not adopt the “60 minute” rule of the US FAA for twin-jets, the A300 became popular with many carriers in the region who could now overfly across the Bay of Bengal. Air India too bought a few A300B4s for its use, though it procured more of the shortened version of the A300, the A310.

As I child I used to run up to the roof of my home in the morning just to watch the A300 climb out from HAL airport en-route to Bombay on its daily flight. The memories of the GE CF6 engines “moaning” on the initial climb, still fresh as always.

The first A300, a B2-101 variant, entered the Indian Airlines’ fleet as VT-EDV on October 31, 1976. This airframe was destroyed in a crash on November 15, 1993 when performing flight IC440. The plane could not land at Hyderabad due to poor weather and ran out of fuel before reaching its alternate airport due to stuck flaps. The next A300 also a B2-101 variant, joined the fleet a month later as VT-EDW. This airframe was performing IC814 from Kathmandu to New Delhi on December 24, 1999 when it was hijacked and taken to Kandahar, Afghanistan.

ETOPS and the dominance of the twin-jet

In 1977 the A300B4 become the world’s first ETOPS (Extended Twin-engine OPerationS) compliant aircraft which permits for extended flights over water. ETOPS catalysed the lucrative north Atlantic market enabling airlines to reduce costs and fares. It is irony, but alarmed by the success of the A300, competitor Boeing developed the 767 which became the pioneer in ETOPS giving Boeing the commanding position it enjoys in the twin-jet wide-body segment today.

In a testament to the strength of the A300 concept, today, other than the rather small VLA (very large aircraft) segment i.e. the Airbus A380 and Boeing 747-8, all other commercial airliners manufactured today are twin-jets.

The A300 was a pioneer in many aspects of aviation including the use of composite materials, final assembly line manufacturing technique, and the “glass cockpit” which introduced the two pilot crew, eliminating the flight engineer position. While the last A300 was made in 2007, it still flies today mostly as freighters.