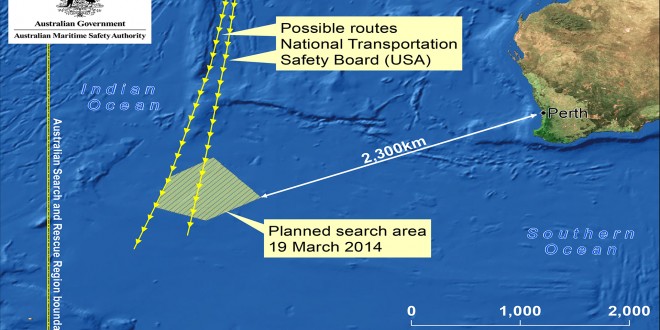 Twelve days after the disappearance of the Boeing 777-200ER 9M-MRO flight MH370, has the search effort involving thousands of people from 26 different nations, found debris from the plane?

Australian prime minister Tony Abbott informed his parliament that “new and credible information has come to light in relation to the search for Malaysia Airlines flight MH370 in the southern Indian Ocean,” “The Australian Maritime Safety Authority (AMSA) has received information based on satellite imagery of objects possibly related to the search.” Mr. Abbott went on to inform Australia’s house of representatives (the lower house of parliament) “Following specialist analysis of this satellite imagery, two possible objects related to the search have been identified,” “I can inform the House that a Royal Australian Air Force Orion has been diverted to attempt to locate the objects.”

An RAAF P-3 Orion maritime surveillance aircraft is over the search area approximately 1,500 miles (2,300 kms) south-west of Perth on the western coast of the island continent, and will be joined by a P-8 Poseidon aircraft of the US Navy and aircraft from New Zealand. The flight time is about four hours to and from, and the expected on-station duration of the P-3 is two hours. The prime minister has cautioned about jumping to conclusions “we must keep in mind the task of locating these objects will be extremely difficult and it may turn out that they are not related to the search for flight MH370.”

The Australia Maritime Safety Authority or AMSA released this statement at 15:27 AEDT

* All times will be expressed in Australian Eastern Daylight Savings Time.

The Australian Maritime Safety Authority is coordinating the search for the missing Malaysia Airlines aircraft, with assistance from the Australian Defence Force, the New Zealand Air Force and the United States Navy.

The images were captured by satellite. They may not be related to the aircraft.

The assessment of these images was provided by the Australian Geospatial-Intelligence Organisation [AGIO] as a possible indication of debris south of the search area that has been the focus of the search operation.

The imagery is in the vicinity of the search area defined and searched in the past two days.

Four aircraft have been reoriented to the area 2500 kilometres south-west of Perth as a result of this information.

A Royal Australian Air Force Orion aircraft arrived in the area about 1.50pm.

A further three aircraft have been tasked by RCC Australia to the area later today, including a Royal New Zealand Air Force Orion and United States Navy P8 Poseidon aircraft.

The New Zealand Orion is due to depart at 8pm.

A RAAF C-130 Hercules aircraft has been tasked by RCC Australia to drop datum marker buoys.

These marker buoys assist RCC Australia by providing information about water movement to assist in drift modelling. They will provide an ongoing reference point if the task of relocating the objects becomes protracted.

A merchant ship that responded to a shipping broadcast issued by RCC Australia on Monday is expected to arrive in the area about 6pm.

Royal Australian Navy ship HMAS Success is en route to the area but is some days away from this area. She is well equipped to recover any objects located and proven to be from MH370.

The focus for AMSA is to continue the search operation, with all available assets.

The assets are searching for anything signs of the missing aircraft.

Weather conditions are moderate in the Southern Indian Ocean where the search is taking place. Poor visibility has been reported.

AMSA continues to hold grave concerns for the passengers and crew on board.

Regular readers of Bangalore Aviation know that I refrain from speculation which is why I refrained from writing any articles, but this incident has stretched the incredulity levels to an all time high, and when a responsible global leaders like Mr. Abbott makes a statement, one has to give it due credibility.

If there is indeed debris from MH370 found, this is only the start. The souther Indian Ocean is a terrible place for ships. It will be extremely difficult to back-track the currents, winds, and tides to even locate the plane, and when it is found, let us keep in mind, it took salvage experts over two years to retrieve parts of Air France AF447 which crashed in to the Atlantic Ocean five years ago.

We pray that there some closure for the relatives and loved ones of the souls on board MH370.