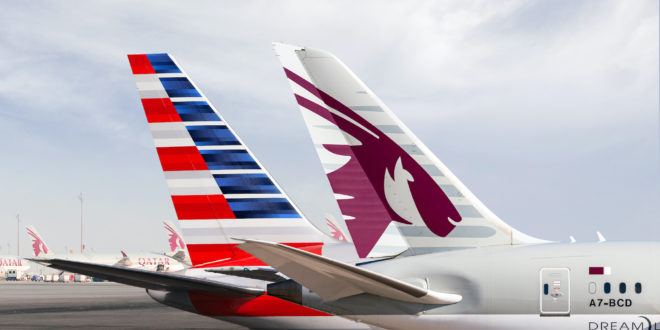 oneworld alliance members American Airlines and Qatar Airways appear to have buried the hatchet and put aside their disputes to sign a strategic partnership and code-share agreement.

The two airlines had an earlier partnership which was unilaterally terminated in 2017, by American Airlines, during its bitter spat over what it claimed were unfair subsidies provided to the three Gulf majors, Emirates, Etihad, and Qatar, by their respective Governments.

In return American’s passengers can book travel on all Qatar Airways flights between the United States and Qatar and to destinations beyond including in the Middle-East, East Africa, South Asia, the Indian Ocean and South East Asia.

The agreement is subject to regulatory approval.

American Airlines will also “explore” opportunities to operate flights between the United States and Qatar, along with a number of joint commercial and operational initiatives to further strengthen this renewed partnership.

Both airlines remain tight-lipped on what has caused this rapprochement, but we at Bangalore Aviation are happy that the two airlines have buried the hatchet and are moving ahead.

Qatar Airways Group Chief Executive His Excellency Mr. Akbar Al Baker said: “We are very pleased to secure this strategic partnership with American Airlines – an agreement between two successful and ambitious airlines with a shared common purpose to enhance the customer experience. The deal will bring together two of the world’s largest airline networks, increasing choices for millions of passengers and providing seamless connectivity to a significant number of new destinations, in line with Qatar Airways’ successful growth strategy.” “We have moved on from past issues and look forward to working closely with American Airlines to build a world-leading partnership for all our customers. This agreement will harness our complementary strengths and resources and enable more customers to experience Qatar Airways’ award-winning product quality.”

American Airlines Chairman and CEO said “Our goal is to continue to expand and deepen global partnerships to complement American’s network and create more choice for our customers.” “The issues that led to the suspension of our partnership two years ago have been addressed and we believe resuming our codeshare agreement will allow us to provide service to markets that our customers, team members and shareholders value, including new growth opportunities for American Airlines. We look forward to the renewed cooperation between our airlines and hope to build an even stronger relationship with Qatar Airways over time.”

American Airlines has been under pressure to keep up with competitors Delta and United which have leapfrogged it in performance. Recently, the DFW-hubbed carrier announced non-stop flights between the tech capitals of Seattle and Bangalore. Lat week, Qatar Airways increased its 21.4% stake in Anglo-Spanish aviation group IAG to 25.4%. IAG is the owner of British Airways, another pillar member of the oneworld alliance, which has a trans-Atlantic joint venture with American Airlines.

A electronics and automotive product management, marketing and branding expert, he was awarded a silver medal at the Lockheed Martin innovation competition 2010. He is ranked 6th on Mashable's list of aviation pros on Twitter and in addition to Bangalore Aviation, he has contributed to leading publications like Aviation Week, Conde Nast Traveller India, The Economic Times, and The Mint (a Wall Street Journal content partner). He remains a frequent flier and shares the good, the bad, and the ugly about the Indian aviation industry without fear or favour.
@BLRAviation
Previous Repairing and retaining brand Air India will challenge any buyer
Next Analysis: What prompted Virgin Atlantic to launch flights from Manchester to New Delhi?

IndiGo, India’s largest and most successful airline and the blockaded Gulf carrier, Qatar Airways will …