A couple of days back, KLM celebrated its 100th anniversary. The airline is the oldest in the world still operating under its original name.

KLM has released a celebratory ad to commemorate the milestone. The film is called “To More Memories Together,” and follows three generations of KLM crew.

KLM said about the film: “The film tracks KLM’s evolution from 1919 to the present day and features classic airplanes such as the Fokker F.II in 1934, the Douglas DC-4 in 1949, Boeing 747 in 1975 and ending with the brand-new Boeing 787-10 Dreamliner. All brought to life with the authentic uniforms, props and details from each decade.”

I expected this video to be a usual corporate film, but after watching it a couple of times, I really appreciated it. It showcases the change in the world of aviation both in technology and socially, with the third generation of the family being a captain on the airline’s newest 787.

A frequent flyer for both work and pleasure - Vedant has held elite status on many of the major alliances and airlines. Also an avid aviation photographer, his pictures have been published in and on the covers of many international publications.
@TheVedic
Previous Demystifying the Air India Asset Holdings bond offering
Next First picture of Vistara’s 787 in full livery. May be delivered earlier than expected. 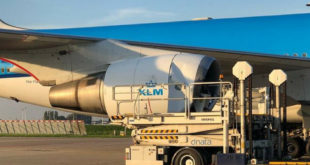