The Main Access Road (MAR) at Bangalore Airport will be closed for two years starting on 10 June for expansion. The 1.4km road is being expanded from its current four lanes (to each way) to 10 lanes (five each way). The expansion was planned to accommodate the increase in traffic to the airport with the new terminal 2.

In the interim period traffic to the terminal will be diverted to the newly constructed six-lane (three each way) Southern Access Road (SAR).

New route to Bangalore airport via the Southern Access Road

Vehicles coming to the Airport will turn right at the first roundabout after the Trumpet Interchange, and enter the SAR to reach the Terminal (refer to the map). Vehicles heading out of the Airport from the departure gates, will follow the existing exit path from the Terminal and head towards P6 parking to reach the SAR. Vehicles returning from Arrival Gates, will continue using the existing route towards SAR. 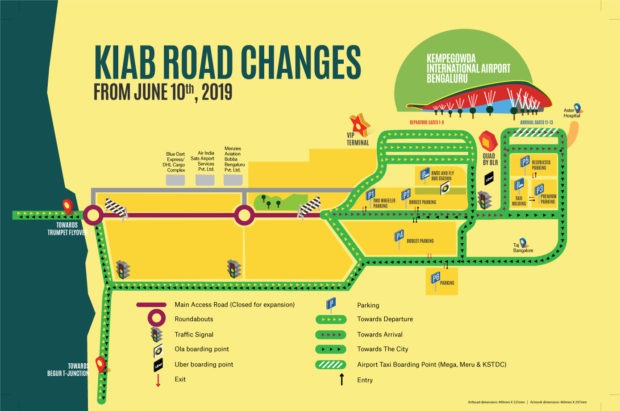 The airport is also expanding the secondary roads to the cargo terminals and the trumpet exchange from the main highway.