As soon as I mentioned to anybody, that I was considering flying Air India to the UK – the reactions I got were ‘Are you crazy?’, ‘Do you enjoy suffering?’, ‘Oh god’ and similar.

We had a whole bunch of Air India miles that were going to start expiring soon. So I was originally looking to book a flight on of the other Star Alliance carriers. However that is easier said than done with Air India. Flight on partner airlines cannot be looked up online, you have to call the call center.

From Bangalore to London, AI’s system shows three flights with two via Delhi and one via Mumbai (with a longer layover). However the week I was traveling seemed to be very busy with only the flight via Mumbai being available.

I reached the airport about 1 hour and 45 minutes before the flight. The Air India counters are located in the center of the check in hall at Bangalore. There was only one passenger ahead of me in the business class line, the economy line was full. 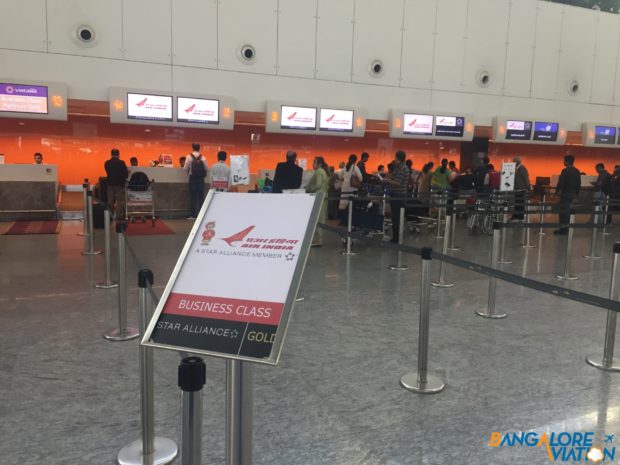 Once I reached the desk, my bag was quickly through checked to London and I was given the boarding passes for both my flights and a lounge pass.

I went through security at the newer security lane which has new more user friendly baggage scanners. After passing security I went up to the Above Ground Level lounge (Read my review of the lounge).

I reached the gate after boarding had already begun, so I’m not sure if the gate agents called priority boarding – but with boarding being done with a bus, I don’t think it would have really mattered. Once the bus reached the aircraft, the entire bus proceeded to board through the front door, with the ground crew not even attempting to direct passengers with rear row seats to the back ladder. Air India’s A319 has a two rows of business class seats in a standard 2-2 layout. The seats are 21 inches wide and quite comfortable. There is more than adequate leg room between the rows. The seats were equipped with an IFE system but it was switched off for the entire duration of the flight.

The seats and cabin unfortunately had a very worn out and badly maintained look. While mostly everything was functional it looked like the plane has never received any TLC.

During the regular pre-flight announcements, I heard a odd new line asking passengers not to sit on the armrests of the seats as it could damage the seats. Leading me to wonder just how often has it happened that the airline announces a warning before the flight? We took off and schedule and quickly climbed to our cruising altitude.

The crew began taking orders for food as soon as we took off. They offered a vegetarian option and two non vegetarian – a chicken 65 and a pan roasted chicken.

The food was served on a tray, with my choice – the pan roasted chicken and veggies, a salad, a yogurt and a dessert (laddus).

The chicken itself was very good and the accompanying veggies were decent. The dessert however was very oily and lacked any kind of flavor. 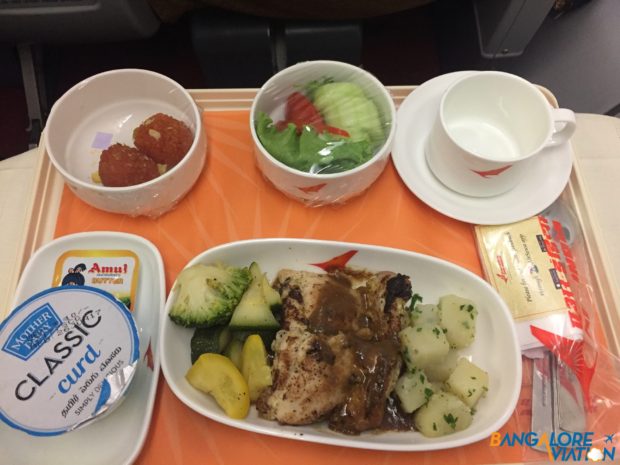 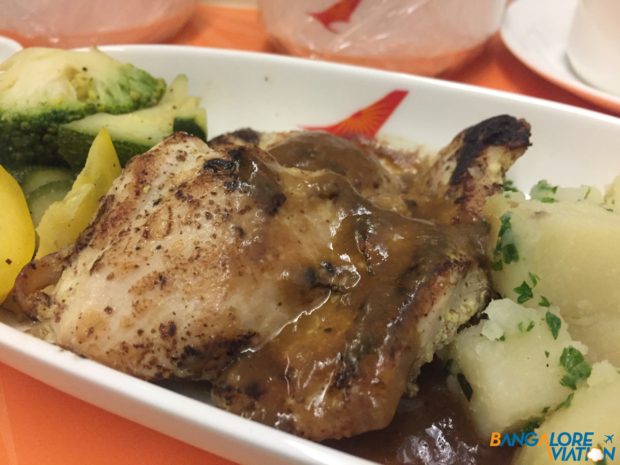 The crew also served bread during the meal, but I didn’t understand the point of serving it separately since they served only one kind of bread without warming it.

Overall the meal was positive and service through the flight was fast and responsive.

The tray was collected quickly after I finished eating. The flight descended into Mumbai uneventfully with the pilot performing her own landing gear strength test on the A319 during landing, we reached the gate on schedule.

There was nothing to complain about on the short flight from Bangalore to Mumbai. The airlines food was above average and service was efficient, but you did get the impression that the crew would rather be anywhere else doing anything else.

The airline has to improve on the maintenance of it’s aircraft, the entire cabin wore a very decrepit and worn out look.

Coming up next the transit hotel in Mumbai, the moronic systems that ruin a world class airport and my onward flight to London.