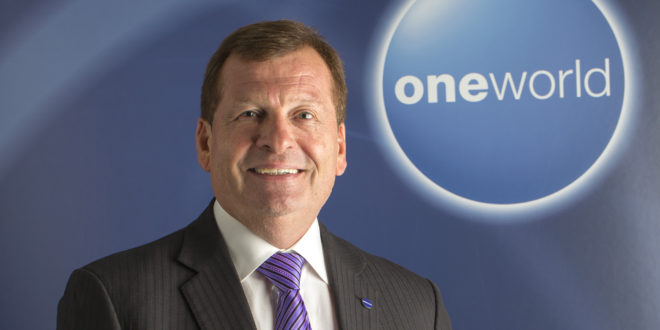 The industry veteran has served with oneworld® members British Airways and Qantas, and with Emirates in his 25 year long career.

Ashby had announced in January, that he would be stepping down as CEO of the alliance have served more than five years in the position.

Rob Gurney will join oneworld in October after leaving Emirates, where he served as Senior Vice-President Commercial Operations The Americas. He will report to the alliance’s Governing Board, comprising the CEOs of all member airlines, and lead the central alliance team, which is based in New York.

In a way it is a home coming for Gurney, who was serving as Qantas’ representative on the oneworld Management Team “Executive Board”, till 2012.

Rob Gurney joined British Airways in 1993, working in commercial roles in Australia, New Zealand and the airline’s London headquarters, where he project managed its first code-sharing partnership with Qantas.

In 1997, he moved to Qantas, working in various commercial roles in the airline’s Sydney headquarters, including revenue management, marketing and distribution. He served as Head of International Sales and Head of Worldwide Sales, ending as Group Executive Qantas Airlines Commercial, with responsibility for worldwide sales and marketing, including alliance relationships, joint ventures, the group’s QantasLink regional carrier, and freight.

After leaving Qantas in 2012, he served for two years as CEO of Helloworld (previously branded Jetset Travelworld Group).

In 2014, he joined Gulf behemoth, Emirates airline, as its Divisional Vice-President Australia and New Zealand, playing an instrumental role in developing the Gulf carrier’s bilateral alliance with Qantas. In 2015, he was transferred by the airline to New York, as Senior Vice-President North America, responsible for all commercial activities in the USA and Canada. In March the South America geography was added to his portfolio for South America, and became Senior Vice-President Commercial Operations The Americas.

A electronics and automotive product management, marketing and branding expert, he was awarded a silver medal at the Lockheed Martin innovation competition 2010. He is ranked 6th on Mashable's list of aviation pros on Twitter and in addition to Bangalore Aviation, he has contributed to leading publications like Aviation Week, Conde Nast Traveller India, The Economic Times, and The Mint (a Wall Street Journal content partner). He remains a frequent flier and shares the good, the bad, and the ugly about the Indian aviation industry without fear or favour.
@BLRAviation
Previous In memoriam: Joe Sutter, father of the Boeing 747 Jumbo Jet (1921-2016)
Next Vistara announces new routes from Bangalore to Guwahati and Kolkata