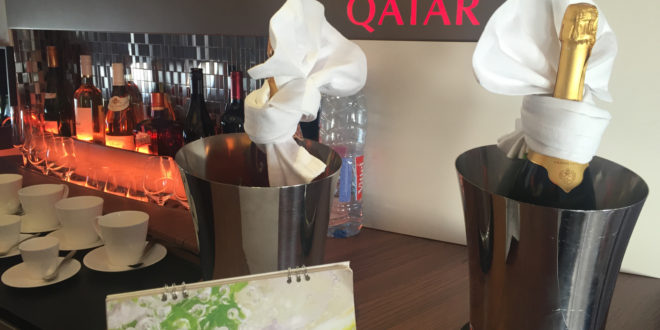 Earlier this year, I flew Qatar Airways from Bangalore to Paris which included one leg on the airline’s flagship aircraft, the Airbus A380.

After leaving the lounge, I was running just a little late. I asked the lounge access agent at the bottom of the escalator where gate B3 was, which was luckily just a five minute walk from the lounge.

I quickly reached the gate where I saw a separate entrance for premium class passengers. Gate B3 is specially designed for the A380. Since Qatar Airways has all its premium class on the upper deck, the pre-boarding holding area is on the upper floor. The two gate agents quickly finished their documents inspection and directed me to the pre-boarding area. Laden with an open camera, I opted for the elevator (lift).

I was greeted at the aircraft door by the lead cabin attendant, who escorted me to my seat. As soon as I settled down, another member of the cabin crew came over to my seat, introduced herself and offered me a drink and a choice between a hot or cold towel. Qatar Airways appears to have a dedicated cabin crew member for a set of seats in their business class. 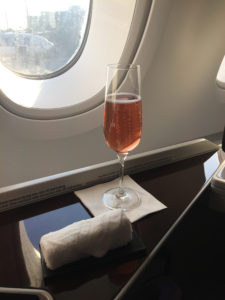 After taking my order, she returned with my drink, a towel and an amenity kit. Qatar has a very nice amenity kit assembled by Giorgio Armani. While the rest of the aircraft was boarding, I was trying to explore the seat and IFE. The business class seat on the Qatar’s A380 is essentially the same product found on the airline’s Boeing 787 and the Airbus A350. (Read our walk-trough of Qatar’s 787.)

The cabin is a herringbone 1-2-1 layout which provides aisle access from each seat. All the seats are outward facing, so my seat faced the window, which I liked. The seat is very comfortable. The seat cushion was just the right balance of soft and firm and was wide in the seated position. The seat reclines into a full flat bed, and at six feet height I was comfortable with more than enough leg room. There are a couple of small storage areas and two side tables between the seat and the window. Overall the seat is very well thought out and easy to use. The ease of accessing the seat or the aisle, does not allow for any partition so you lose out on a bit is privacy.

The seat controls located at the top of the armrest is welcome.

The gloss surfaces on the side tables reflect the sunlight to produce an irritating glare. Unfortunately the glare is most severe in the mid-morning when most of the airline’s US and European take-off from Doha. The passenger in front of me very kindly lowered the window-shade as soon as I requested.

The in-flight entertainment (IFE) is controlled by a remote with a touch screen which I at first found a little irritating to use. After getting used to it, I was able to find my way around better but I still did not like that remote. The small screen on the remote, is very useful to see the flight map or some other options while your movie is running.

The AVOD (audio video on demand) IFE has a huge selection of content with both Hollywood, Bollywood, European and Asian titles. The airline had all seven Star Wars movies running. The screen is very good with bright colours and high resolution. Unfortunately the IFE can only be controlled by the touch screen remote, which as I mentioned before was quite irritating to use and led to me selecting the wrong option two – three times.

I enjoyed the views from the tail mounted camera on the A380, including the full overview of the aircraft as it taxis and takes-off.

Qatar’s safety video is themed on the FC Barcelona team, whom they sponsor. The video is eye catching and makes you actually watch it. A good move by Qatar both in terms of branding and for safety awareness.

Qatar offers an ‘any-time dining’ option, allowing you to choose your dishes and when you want to eat. The system requires a little getting used to, as it is not in the traditional course-wise format with a this or that choice. If you want to eat both the appetisers, you can. I love this flexibility. After noting my choices, the crew asked when I would like to be served? I opted for 90 minutes later.

Hats off to the crew who came to my seat at my requested time to confirm service. Qatar follows a pre-plated system and does not use trays. The crew arranges the table before serving the meal. I began with cured salmon with dill cream cheese which was very good. The accompanying salad was fresh and crisp. The next course was a Arabic mezze which was ok. Finally a chicken salad that was again very good. No dessert for me please. Overall the meal was good while the service was very good.

The Qatar A380 on-board lounge

Probably the best feature of the Qatar Airways A380 is the on-board lounge bar located just behind the business class cabin. Unlike the Emirates’ A380 which has a small lounge, Qatar’s bar counter is huge and provides first and business class passengers a full sized stand-up bar area. It is a very inviting location on-board the A380.

The lounge area also provides sofas on either side of the bar counter and its counter is adorned with these huge, lovely red roses. Qatar’s attention to detail is visible at the bar, everything from the chandeliers to a cover for the emergency exits looks like it belongs perfectly in that space. 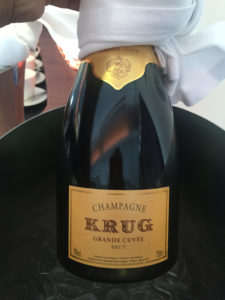 Since the lounge bar caters to first class passengers as well as business, the drinks from the first class menu are also served to the business class passengers. So enjoy Champagne Krug from first class in addition to the Champagne Drappier Rosé, or some great Puligny Montrachet or single malt Scotch whisky. There is also a small menu of cocktails that can also be ordered and a small selection of nuts, crackers and olives.

Immediately behind the lounge is a small section of economy class that is usually reserved for elite status holders on Qatar and oneworld. This economy area is configured in a 2-4-2 configuration as opposed to the 3-4-3 on the lower level, though seats are of the same width.

Arrival into Paris was uneventful, again the tail cam provides a fantastic view of the aircraft landing and moving around the airport. Taxi was a little long, but we were quickly off after we connected to the gate. As we were de-planing, we were handed fast track passes for immigration.

After an interesting walk through the terminal – Paris’ terminal 1 has a rather unique layout especially compared to most modern terminals, I reached immigration. There was no line and I walked to the first available counter. This was the least time I have ever spent at an immigration desk. In less than a minute my passport was returned to me and I was on my way.

Qatar Airways has spent a great deal of time and effort in creating it’s new business class product and it shows. From the hard cabin product to the cabin crew, every aspect has been thought out and executed flawlessly. If I were to nit-pick, the only mediocre aspect, in an otherwise great experience was the meal service. The airline should also aspire to the pre-book service offered by Singapore Airlines, ‘Book The Cook’ which enables premium class passengers to choose their main course dishes before the flight.

A frequent flyer for both work and pleasure - Vedant has held elite status on many of the major alliances and airlines. Also an avid aviation photographer, his pictures have been published in and on the covers of many international publications.
@TheVedic
Previous Jet Airways Q1 FY2017 results analysis – headwinds and turbulence likely
Next In memoriam: Joe Sutter, father of the Boeing 747 Jumbo Jet (1921-2016)