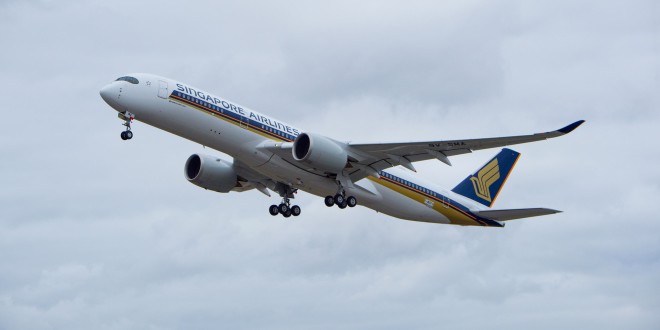 Singapore Airlines will launch daily non-stop flights between Singapore and San Francisco in the winter schedule starting October 23, 2016 using the Airbus A350-900 aircraft. The 13,600km flight will be the longest non-stop at the time in the airline’s network. It is expect to take between 14h35m and 17h45m depending on the direction of flight and the time of the year. The longest will be in the winter months from San Francisco to Singapore. The airline will face a payload penalty on the longest durations.

The move is a clear counter to fellow Star Alliance member United Airlines, which commenced a non-stop flight between the two cities earlier this month, using the competing Boeing 787-9 Dreamliner.

San Francisco will see a marginal reduction in seats as the Airbus A350-900 is configured with 253 seats. However, the passengers will be offered the latest generation cabin product of the airline which features the new in-flight entertainment app.

This will leave the Singapore Frankfurt New York JFK as the only A380 service Singapore Airlines will operate to the United States.

What exactly does Singapore Airlines plan to do with the two A380s that will be released from the Los Angeles route is not clear. As the launch customer of the aircraft, the first of its A380 leases will be completing in early 2017. Will the airline return the oldest airframes? or renew the leases? That is just one of the buzz in the industry.

The island nation’s flag carrier also announced a suspension of its thrice weekly Singapore Barcelona Sao Paulo flight due to poor economic conditions in Brazil. The airline positions itself as a premium carrier even in economy class and has fares to match.

San Francisco is a major destination for Singapore Airlines from Bangalore. The silicon plateau to silicon valley trip is a one-stop connection on the airline’s major competitors – Lufthansa, Cathay Pacific, Etihad, and Emirates. The new non-stop will bring Singapore Airlines on par with its competitors on the stops and will supersede them on the hard and soft product, helping it retain a strong position.

The reduction in flight time on the return San Francisco Singapore leg, will be a boon, as the new arrival time of early evening will allow for quick connections on to the late evening Singapore Bangalore flight, something the current near mid-night arrival does not allow for.

A electronics and automotive product management, marketing and branding expert, he was awarded a silver medal at the Lockheed Martin innovation competition 2010. He is ranked 6th on Mashable's list of aviation pros on Twitter and in addition to Bangalore Aviation, he has contributed to leading publications like Aviation Week, Conde Nast Traveller India, The Economic Times, and The Mint (a Wall Street Journal content partner). He remains a frequent flier and shares the good, the bad, and the ugly about the Indian aviation industry without fear or favour.
@BLRAviation
Previous Cabinet approves the new civil aviation policy. Boost for Vistara and Air Asia.
Next India permits 100% foreign investment in airlines and airports