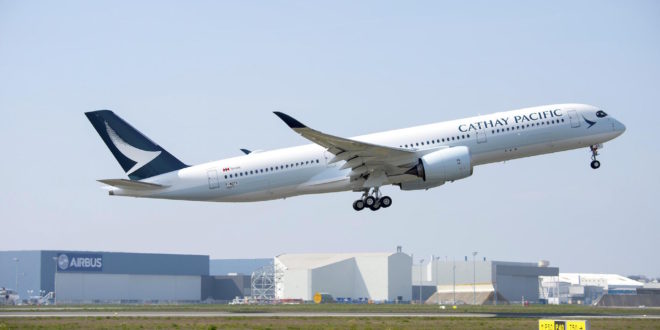 Cathay Pacific becomes the sixth operator of the Airbus A350-900. Airbus photo.

Cathay Pacific takes delivery of its first Airbus A350-900

Hong Kong based Cathay Pacific that operates an all wide-body fleet has unveiled its first Airbus A350 XWB, thus becoming the sixth operator in the world and the third in Asia, after Vietnam Airlines and Singapore Airlines. The airline has a total of 21 A350-900s on order, 12 of which are expected to be delivered this year.

The A350-900 has an impressive interior with 280 seats. The 38 seats in Business class in 1-2-1 layout are convertible to fully lie-flat beds with increased personal TV size from 15.4” to 18.5” and extra stowage space. There are 28 seats in Premium Economy in a 2-4-2 layout with full length leg-rest on all rows. The 214 seats on Economy class have 214 seats in a 3-3-3 layout where there is an increase in TV size, decrease in seat-width by half an inch while pitch remains the same. Wi-fi on the flight is available on demand for one, six or over six hours.

Initially, the airline will use the A350-900 to fly regional routes like Taipei and Manila. But later in the year, it will replace its older Boeing 747-400 aircraft with its latest purchase and start regular long-haul routes.

Our dedicated staff at Bangalore Aviation bring you stories from across the aviation world.
@@BLRAviation
Previous Airbus A320neo with CFM LEAP-1A engine certified by EASA and FAA
Next Jet Airways Q4 and full year 2015-16 results and performance analysis