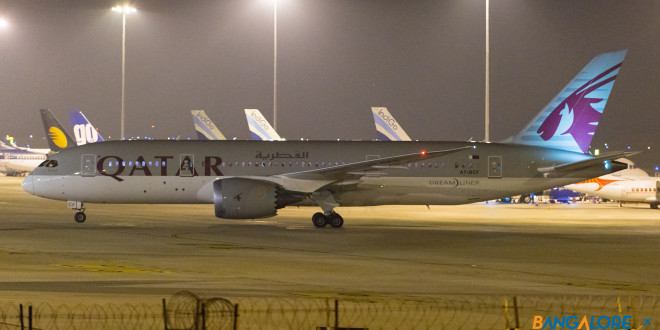 Qatar Airways in talks with IndiGo, denies interest in SpiceJet

July 28, 2015 Comments Off on Qatar Airways in talks with IndiGo, denies interest in SpiceJet 24 Views

National carrier Qatar Airways has issued a statement denying any interest in picking up a stake in Gurgaon based SpiceJet. The middle-eastern carrier says

This release is to confirm that Qatar Airways is not in talks to pursue a commercial stake in SpiceJet. There is no interest from the airline to engage in a partnership with the Gurgaon-based airline.

Qatar Airways officially states that it is an inaccurate claim from news reports that, ‘’Qatar Airways is picking up a stake in SpiceJet’’.

Claims are also being made in news reports that a consensus has been reached regarding an interline agreement, and that negotiations are set to continue in the near future.

Qatar Airways presently does not have any form of interline agreement with SpiceJet, which is the simplest form of relations between any two airlines, and Qatar Airways is not planning to pursue any form of arrangement in the future.

Qatar Airways “confirmed that the only airline it is talking to is the Indian carrier Indigo.”

Qatar has the smallest bi-lateral seat allocation amongst the homes of the three major gulf carriers Emirates and Etihad. Compared to the whopping 66,000 seats a week Dubai, home of Emirates airline, is allowed, Qatar has a measly 24,292. Abu Dhabi received an almost 700% increase in seat allocation at the same time its national carrier Etihad, bought a 24% stake sale in Jet Airways. You can read our analysis on that questionable deal.

For Qatar to increase its seats allocation, it has to partner with an Indian carrier which will feed its Doha hub the same way Etihad uses Jet Airways to feed its Abu Dhabi hub.