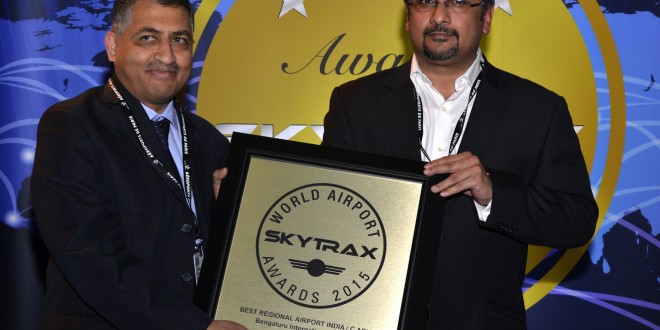 Bhaskar Bodapat and Hari Marar of BIAL with award at the SKYTRAX World Airports Awards 2015, Paris. Click on image to expand. BIAL image.

The SKYTRAX World Airport Awards is the largest passenger satisfaction survey measured across 39 key performance indicators in airport service excellence and quality. The World Airport Awards are based on 13.02 million customer nominations across 112 nationalities of air travellers and included 550 airports worldwide. Regional Airports refers to the airports operating short international and domestic flights, rather than having a vast intercontinental network.

When asked why? the airport operator Bengaluru International Airport Limited (BIAL) responded “Being a customer-friendly airport continues to be paramount for us at Kempegowda International Airport, Bengaluru (KIAB). We are happy to observe that our efforts to cause minimum passenger inconvenience during the current infrastructural upgrades have paid off, with an increase in the ratings from 4.14 last year to 4.37 this year. We believe this ratings is a reflection of our continued focus on improving operational efficiency. The airport registered this increase despite the continuous modification work and service upgrades at the airport, which has been undertaken to provide superior experience for our passengers at KIAB. We are certain that with these service level upgradation, process improvement and elevated passenger experience our ASQ scores will significantly improve.“

A electronics and automotive product management, marketing and branding expert, he was awarded a silver medal at the Lockheed Martin innovation competition 2010. He is ranked 6th on Mashable's list of aviation pros on Twitter and in addition to Bangalore Aviation, he has contributed to leading publications like Aviation Week, Conde Nast Traveller India, The Economic Times, and The Mint (a Wall Street Journal content partner). He remains a frequent flier and shares the good, the bad, and the ugly about the Indian aviation industry without fear or favour.
@BLRAviation
Previous Vistara to acquire GoAir. Will fly international soon.
Next Vistara to begin services to Pune