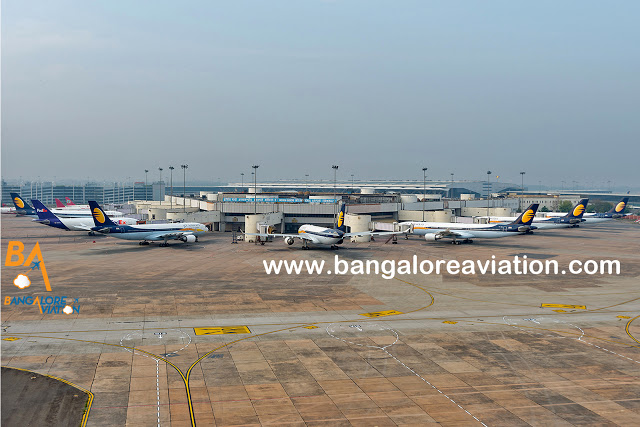 Bulk of Jet's 330 fleet lying on the ground at Delhi. Copyright Devesh Agarwal.

Airline Route reports that Abu Dhabi based Etihad Airways is planning to deploy wide body A330-200s and Boeing 777-300ERs it has leased from India’s Jet Airways on flights around the world in the Winter 2014 schedule which commences from October 26th. Etihad holds a 24% share in Jet.

The Boeing 777-300ERs leased from Jet will be deployed on:

Jet’s inability to effectively utilise its wide-body fleet is long known. For most of 2013, much of its A330-200 fleet was sitting on the ground at New Delhi’s Indira Gandhi airport, while the airline has been leasing out up to seven of its ten Boeing 777-300ERs to Gulf Air (see photo), Turkish Airlines and Thai Airways (see photos of Jet’s 777s in Turkish Airlines livery). Now that both Turkish and Thai are receiving their own 777-300ERs, they are returning the leased aircraft to Jet who now has to rely on Etihad to utilise these aircraft.

Even today, Jet Airways effectively keeps one 777-300ER grounded by parking two 777s from early morning to late night at Hong Kong airport, as they are “unable to better utilise the aircraft”.

It is indeed a sad commentary on aircraft that were voted as having the best First Class service in the world by Business Traveller in 2008. But at least these beauties are finding a second lease of life in the desert sands.

The above schedules and deployments are subject to change.

A electronics and automotive product management, marketing and branding expert, he was awarded a silver medal at the Lockheed Martin innovation competition 2010. He is ranked 6th on Mashable's list of aviation pros on Twitter and in addition to Bangalore Aviation, he has contributed to leading publications like Aviation Week, Conde Nast Traveller India, The Economic Times, and The Mint (a Wall Street Journal content partner). He remains a frequent flier and shares the good, the bad, and the ugly about the Indian aviation industry without fear or favour.
@BLRAviation
Previous CFM LEAP 1-C engine for Comac C919 achieves first flight
Next Video: Cargolux Boeing 747-8F pilot does a ultra-low height wing wave