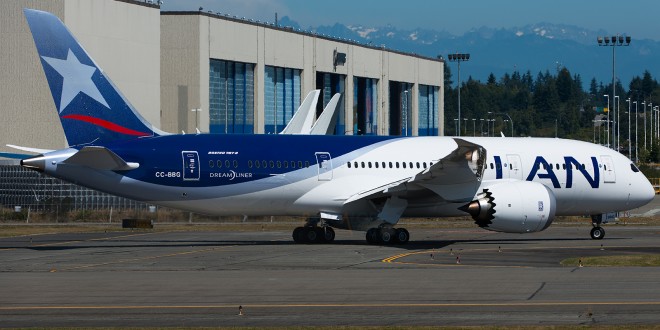 LAN Airlines Boeing 787-8 CC-BBG. Seen here taxing back to the flight line at Paine Field after a test flight.

Through the lens: Dreamliners at Paine Field

September 29, 2014 Comments Off on Through the lens: Dreamliners at Paine Field 20 Views

The runway at Paine Field is used for all the flight testing of new Boeing planes before their delivery. While we were at the airport there were movements of two brand new 787 dreamliners.

The first was CC-BBG, a 787-8 destined for LAN Airlines. It is powered by two Rolls-Royce RR Trent 1000 engines.

The second movement of the day was JY-BAA, the first 787-8 destined for Royal Jordanian. It is powered by two General Electric GEnx-1B engines.