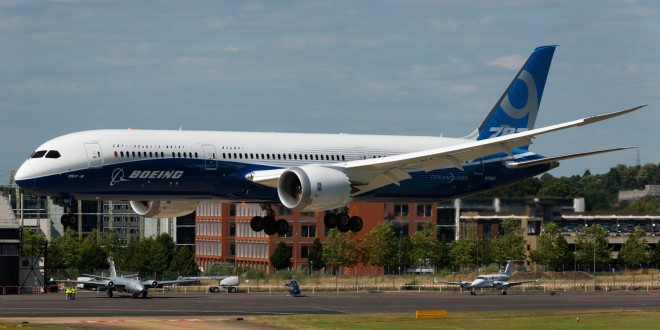 Boeing 787-9 Dreamliner. Seen landing after it's display on day one of Farnborough 2014. Photo by Vedant.

US airframer Boeing showcased its new 787-9 Dreamliner as it began an aggressive counter to European rival Airbus ahead of the start of the Farnborough air show 2014. Readers will recall, Boeing delivered the first 787-9 to launch customer Air New Zealand less than a week ago.

Detailing the progress of Boeing’s newest twin-jet wide-body offering, Randy Tinseth, Vice President marketing, said the new 787-9 was ETOPS certified at a whopping 330 minutes “right out of the gate”. This will enable airlines to fly more direct routes over the ocean as they need to be only within 6.5 flying hours of the nearest airport. Currently only the Rolls Royce Trent 1000 powered 787-9s are certified. Certification for the GEnx engine is in progress.

READ ONLINE: Photos inside the Boeing 787-9 in test configuration

Highlighting the completeness of the twin-jet wide-body product offering of Boeing, Tinseth came out strongly against the proposed A330neo (new engine option) offering by rival Airbus. He said the launch of the new model meant that Airbus is tacitly admitting it has failed with the new A350-800. This is reflected by the lack of orders for the aircraft. Tinseth went on to say the A350-1000 is also a failure and this means Airbus has a “one-trick pony” referring to the sole model the A350-900 which is the highest ordered variant of the A350 family.

Dismissing the claimed fuel efficiency improvements by Airbus, Tinseth challenged the assembled media to ask Airbus, against which aircraft were they claiming their improved efficiencies against.

However, under the bravado, the A330neo clearly concerns Boeing. In the aviation industry any wide-body which sells more than 1,000 frames is considered a best seller, and very few aircraft can lay claim to this success. Boeing has two in this club, the 747 and the 777, and Airbus, the A330, which despite being discontinued almost a decade ago, still has an order backlog.

With an estimated development capital outlay of only $1 billion to $2 billion compared to the $5+ billion a new airframe requires, the A330neo will allow Airbus to close the performance gap with the 787 family at a substantially lower capital cost and in a much quicker time frame. This will translate in to much lower prices for a new A330neo compared to the 787, as well as better deliveries, all wrapped up in a proven airframe. In capital expensive markets like India, Airbus will be able to match up total life-cycle costs with the Dreamliner.

Tinseth tacitly admitted the latest variant of the venerable Boeing 747 “jumbo-jet” the 747-8 is not meeting expectations. The company is only producing three airframes every two months and this too is a soft demand primarily driven by the dedicated freighter market, and given the poor economic conditions, this is also a weak demand.

With the upcoming 777-9X expected carry upwards of 400 passengers in a mixed configuration, can we expect the “queen of the skies” to be finally put out to pasture?

READ ONLINE: Photos inside the Boeing 787-9 in test configuration