Allen brings airline operations experience of over 30 years and he is a fully-qualified pilot with more than 17,000 hours of total flying time and holds a current licence for the Boeing 777 aircraft.

Calum Laming has been appointed Vice President guest experience. He returns to Etihad Airways having held the executive position of General Manager customer experience in Air New Zealand since March 2013. Laming has served with Etihad earlier as Head of guest experience.

The UAE carrier also announced internal transitions in line with its re-structuring to transition the group from a single entity airline to a wider global aviation group. The new structure distinguishes the functions relating purely to Etihad Airways and those which support the growth and success of its subsidiaries, joint venture companies and equity partners.

A electronics and automotive product management, marketing and branding expert, he was awarded a silver medal at the Lockheed Martin innovation competition 2010. He is ranked 6th on Mashable's list of aviation pros on Twitter and in addition to Bangalore Aviation, he has contributed to leading publications like Aviation Week, Conde Nast Traveller India, The Economic Times, and The Mint (a Wall Street Journal content partner). He remains a frequent flier and shares the good, the bad, and the ugly about the Indian aviation industry without fear or favour.
@BLRAviation
Previous Vasuki Prasad, the flying engineer, joins Bangalore Aviation
Next ATC recording: #MH192 incident – ground vehicle clears runway seconds before emergency landing 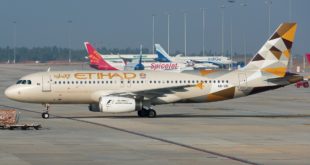