After unsuccessfully trying for almost two years to be the first airline to operate the Airbus A380 superjumbo to India, German carrier Lufthansa, is doing one better, and bringing to its second largest international market, its latest aircraft, the newest avatar of the venerable Boeing 747, the 747-8 Intercontinental or B748i in short. 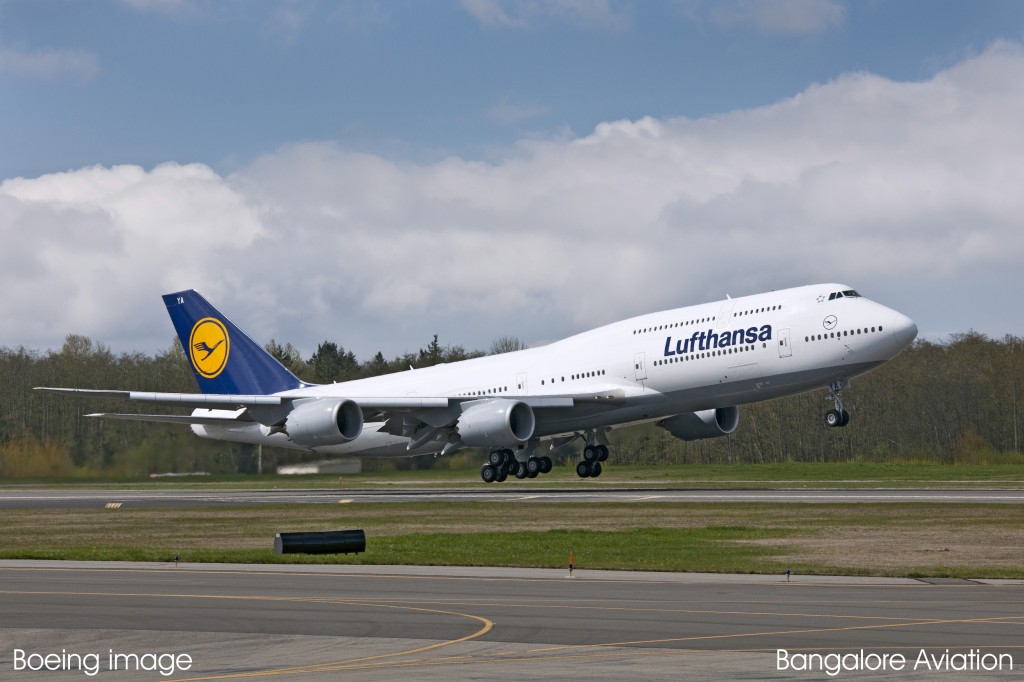 From Monday, the nation’s capital Delhi, will become the second global, and first Asian destination to be served by the newest “Queen of the Skies” which is outfitted with the carrier’s latest business class product (see photos and video here). 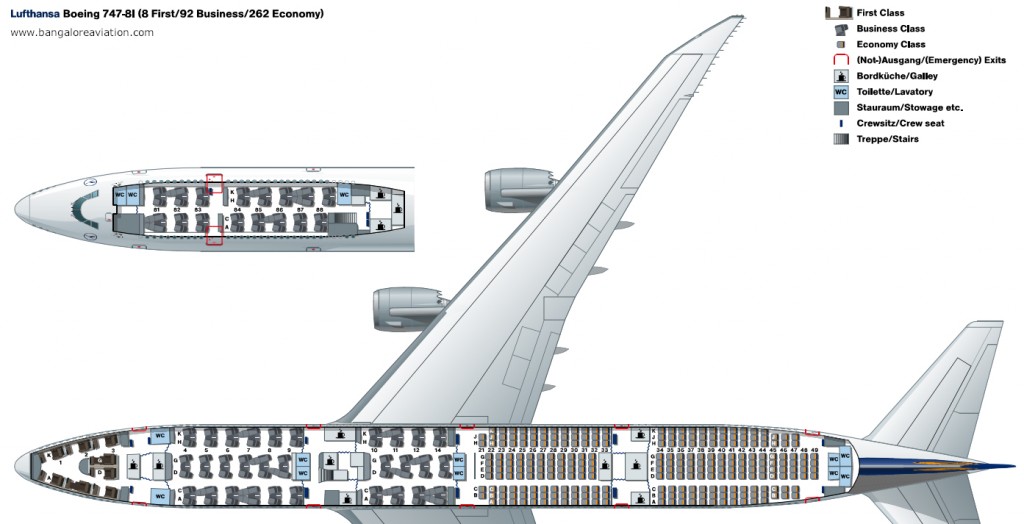 The 747-8i is configured with 8 first, 92 business and 262 economy class seats. In a departure from the Boeing 747-400s, the first class in the B748 goes back to its traditional location, in nose section. The first class is the same as that on the airline’s A380s, but has additional sound-proofing to make it the quietest first class cabin in the world.

The business class is also in a traditional split configuration with 32 seats on the upper deck and 60 on the lower.

This PDF document has complete details on Lufthansa’s Boeing 747-8i cabin product.

With this 747-8i launch Lufthansa finally connects its two largest markets, the United States and India with its newest cabin and aircraft products, thus overcoming a long standing complaint of passengers.

“Choosing India as launch-pad for our latest two products in Asia underlines this market’s importance in our global network as well as our commitment to grow here”, “With the B747-8 and our brand new Business Class, we are offering Indian customers exceptional travel comfort. These investments will further strengthen Lufthansa’s position in the core market that is India.”

Lufthansa is the launch customer for the 747-8i. Since the start of June, the first aircraft, D-ABYA, has been deployed on the Frankfurt-Washington Dulles route. The carrier took delivery of its second aircraft, D-ABYC, just a few days ago. It is receiving final fitments and touches at the airline’s home base Frankfurt before starting its Delhi service on August 6.

A further two 747-8i, from the total order of 20, are scheduled for delivery in 2012. D-ABYD, the third aircraft, had its first flight just yesterday. Based on our best judgement, this aircraft is expected to join the Lufthansa fleet in late August or early September. Bangalore passengers can expect the airline to announce its Bangalore service soon.

Share your thoughts. We invite your comments on these developments.

A electronics and automotive product management, marketing and branding expert, he was awarded a silver medal at the Lockheed Martin innovation competition 2010. He is ranked 6th on Mashable's list of aviation pros on Twitter and in addition to Bangalore Aviation, he has contributed to leading publications like Aviation Week, Conde Nast Traveller India, The Economic Times, and The Mint (a Wall Street Journal content partner). He remains a frequent flier and shares the good, the bad, and the ugly about the Indian aviation industry without fear or favour.
@BLRAviation
Previous Photos: Airbus powers up cockpit of first A350 XWB MSN1
Next Bangalore Aviation crosses 2.3 million page views. Thanks dear readers and contributors.