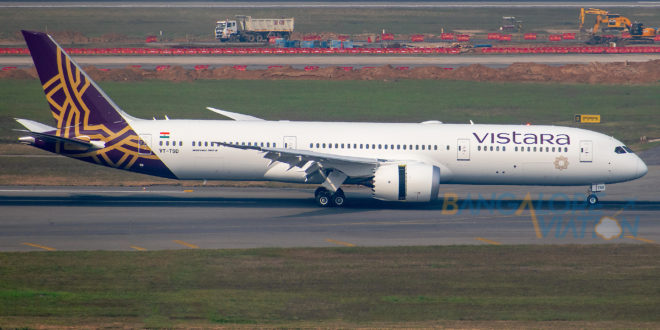 The flight will be operated by Vistara’s sole Boeing 787-9 Dreamliner (click the link for cabin images), though the airline is expected to receive its second 787 in about a fortnight.

The tentative schedule suggests a post-midnight departure from New Delhi on Mondays, Wednesdays, Fridays, and Sundays, with a 06:55 early morning arrival in to London.

This schedule should hold good for the summer 2020 season which ends in October.

When contacted, the spokesperson of the airline said she was “unable to offer any comment”.

Vistara has always followed a philosophy of “actions speak louder than words”. London is a priority destination for the airline and for Indians in general, but more so from Delhi and Mumbai.

The London Delhi and London Mumbai routes are capacity constrained. While six days out, and Vistara not announcing the flight, given the pent-up demand and the reputation of Vistara and the anticipation, we would not be surprised to see the flight sell out in less than three days.

The early morning London arrival is perfect for the corporate traveller. Vistara’s code-share partnership with British Airways should enable premium travellers access to the lovely arrivals lounge at London Heathrow Terminal 5. In additional to a sumptuous breakfast, internet and showers, the lounge features complimentary pressing of a suit allowing the business traveller to freshen up and proceed directly for a meeting.

The return flight afternoon mimics the late afternoon timings of British Airways flights to the southern Indian cities. The timing will feed Vistara morning departures from its Delhi hub to major cities across India, including Bangalore. Additionally, by fitting in-between, it will complement code-share partner BA’s regular schedule to Delhi.

Will Vistara commence a Mumbai London flight with its second 787, move to daily flight on the Delhi London route, or will it commence a Delhi Tokyo flight?

Let us also keep in mind Vistara’s spanking new A321neos with the full flat business class. I expect Vistara to deploy them on the New Delhi Singapore route once normalcy returns.

A electronics and automotive product management, marketing and branding expert, he was awarded a silver medal at the Lockheed Martin innovation competition 2010. He is ranked 6th on Mashable's list of aviation pros on Twitter and in addition to Bangalore Aviation, he has contributed to leading publications like Aviation Week, Conde Nast Traveller India, The Economic Times, and The Mint (a Wall Street Journal content partner). He remains a frequent flier and shares the good, the bad, and the ugly about the Indian aviation industry without fear or favour.
@BLRAviation
Previous Air India Express IX1344 overshoots runway and falls into valley at Kozhikode airport
Next Lufthansa will resume Germany to India passenger flights from 13 August