In a time where political leaders are appealing to citizens to do the “right things”, where some businesses highlight values of profit over purpose and where all need to come together to tide over this crisis collectively, the actions of airlines and the lack of accountability have left many perplexed.

Specifically: the non-refunding of passenger monies – an unfair and unethical practice and at odds with policy, public interest and consumer protection.

Yet, airlines choose not to follow this official policy, and are holding all cancellations in a Credit Shell irrespective of whether the flight was cancelled due to the airline not operating the flight. Similar practices were being followed by many airlines globally, which has prompted many regulators like, the US Department of Transport to issue notices insisting on airlines following refund policies.

After the failure of Indian airlines to issue refunds coupled with a public outcry, a recent memorandum has been issued by the Ministry of Civil Aviation. 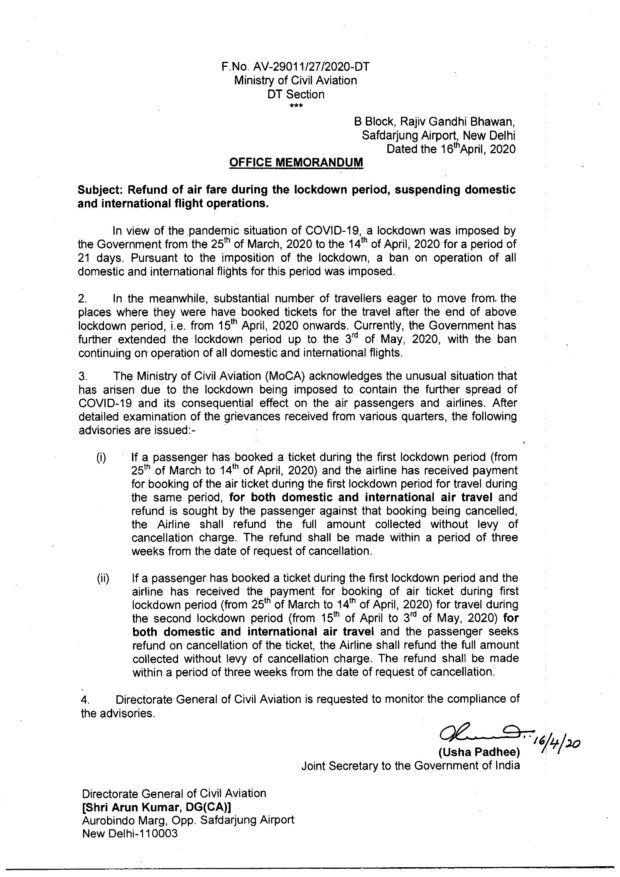 This supersedes the existing 12-year-old policy, which the airlines are already refusing to follow. It sets a dangerous precedent of questioning the Ministry’s own standards of accountability and consumer protection. The passengers and the nation are the ultimate losers.

The new memorandum highlights that airlines must refund the money to only those passengers who have booked tickets during the lockdown period. Why this distinction is made is not highlighted and neither was this policy put out for public consultation.

In this situation the Government and airlines have demonstrated the so-called Passenger Charter is not even worth the paper it is written on.

Perhaps what informs this decision is that cash balances across the six Indian airlines are approximate ~12000 crores of which if you take away Indigo the balance across the remaining five airlines is 2,297 crores. Compare this with a lease outflow per month across the six airlines of ~10,500 crores as of January 2020. Several airlines are down to a few days cash of operations and are looking at the grim reality of cessation of operations.

Yet, passengers are the lifeblood of aviation however that fact seems to be conveniently overlooked. If anything the current focus of the ministry and airlines should be on restoring and reviving consumer confidence. Especially because it is the same consumer that will now be approached for bailouts.

To be sure this cashflow challenge is not solely of coronas making. Even last year, cash as a multiple of operating revenues for Indian carriers was as below:

The cash multiples of unlisted carriers like Air India, GoAir, Tata-SIA Vistara, etc. were similar to SpiceJet and Jet. In a recent television interview a prominent aviation consultant said there was an Indian airline that had less than one day’s worth of cash on hand. Airlines failed to set aside money for a rainy day and unfortunately, it’s not only raining now but there’s a storm which will continue for a while.

The rationale the airlines don’t have cash for continuing operations is also flawed because customers to have bills to pay. And ensuring liquidity is something we all do in our homes and businesses. Effectively taxpayers are being told that airlines were living paycheck to paycheck so need to be bailed out

Indian carriers would be well advised to think back to what the founder of the nation, Mahatma Gandhi, said, “A customer is the most important visitor on our premises. He is not dependent on us. We are dependent on him.”