Last week, I was invited by Singapore Airlines to visit the Airbus Asia Training Centre (AATC). The AATC is part of the Airbus Flight Training Network which is used to train pilots to fly Airbus type aircraft. The AATC is a joint venture between Airbus and Singapore Airlines, which hold 55 and 45% respectively. The operations of the company began in 2015 at the Singapore Airlines Training Center. In April 2016, the AATC moved to its current facility a 9,250 sqm facility in Seletar Aerospace Park.

The facility is the largest Airbus flight training centre in the world and also has the most number of A350 simulators in the world. 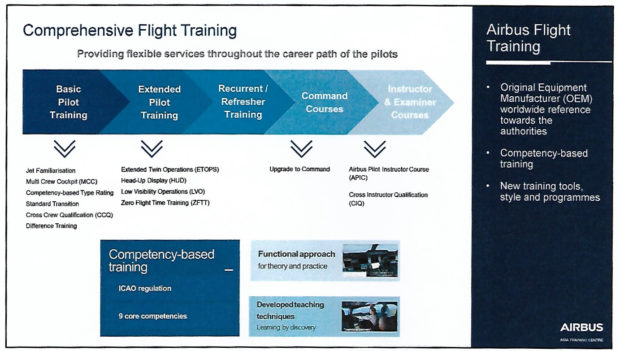 The training is headed by Captain BK Chin who is a Singapore Airlines captain with over 30 years of experience flying for the airline.

The front of the upper level hosts the offices of the AATC staff.

The front of the lower level is the entrance near which is the cafeteria and a small recreation area. Near the entrance is also an Airbus shop with models and other Airbus memorabilia. 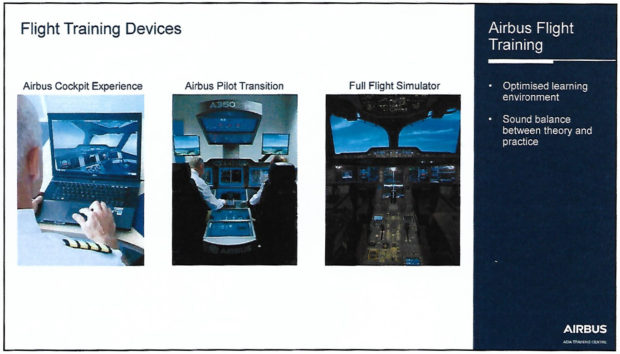 The ACE is a computer or tablet based simulation of the cockpit, the takes trainee pilots through various modules of training and allows them to digitally interact with the cockpit layout and simulates the various functions being taught theoretically.

Work stations that can be used by trainees to use the ACE at the AATC. Trainees can also use the ACE computers from the comfort of their homes or hotels.

The APT is a fixed base, mini simulator which allows trainees to sit in a cockpit type setup to begin understanding the position and functioning of an Airbus cockpit. Trainees get an understanding of the dynamics and effects of the controls on an aircraft. 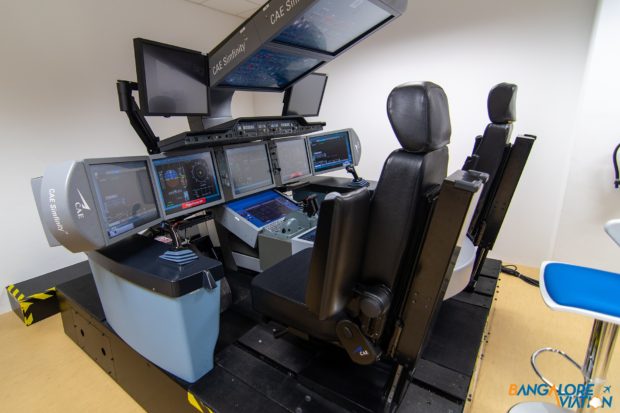 The flight simulators don’t really need any introduction, the high tech machines reproduce exact flight conditions and allow pilots to be trained in a variety of scenarios that would never have been possible on an actual aircraft.

The simulators run round the clock – 24 hours a day with each simulator slot usually lasting four hours. The second hall currently has three installed simulators and has the capacity to add two more. The hall has two A350 and one A320 simulators. 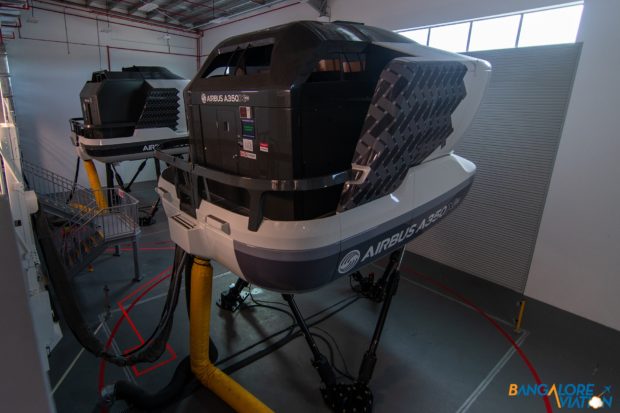 The AATC currently has a capacity to train 6,000 pilots per year and has trained pilots from 60 airlines. The Airbus Asia Training Centre is a very impressive facility – it is the largest Airbus simulator centre in the world. The team at the facility take a lot of pride in the facility, their training methodologies and their offerings.

BangaloreAviation was invited on this tour by Singapore Airlines. They covered the expenses for this trip. Singapore Airlines or its associates did not review this article before publication. Our views remain independent and our own.