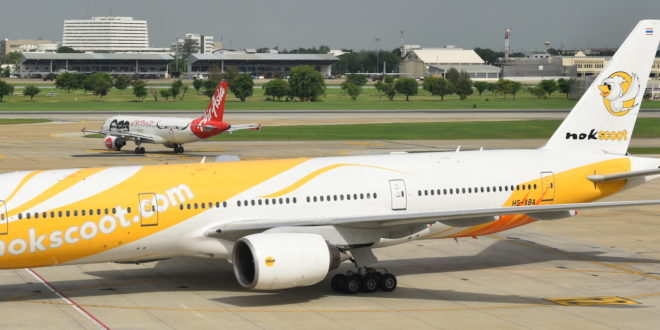 Picture by Alec Wilson. Do not reproduce without permission.

The airline which is a joint venture of Thai carrier Nok Air and Scoot which is a subsidiary of Singapore Airlines. The airline operates a fleet of five ex-Singapore Airlines Boeing 777-200ERs which are configured in a 24 business and 391 economy configuration. One of the airlines 777s was part of Scoot’s original fleet when it began operations.

NokScoot will operate a 3x weekly service to Delhi from Bangkok with the following schedule:

The airline will join Thai Airways, Air India, SpiceJet and Jet Airways, all of which operate one or more daily flights between Delhi and Bangkok.

Our dedicated staff at Bangalore Aviation bring you stories from across the aviation world.
@@BLRAviation
Previous Embraer delivers 1,500th E-Jet to Horizon Air
Next Singapore Airlines begins operations with Bangalore bound regional A350