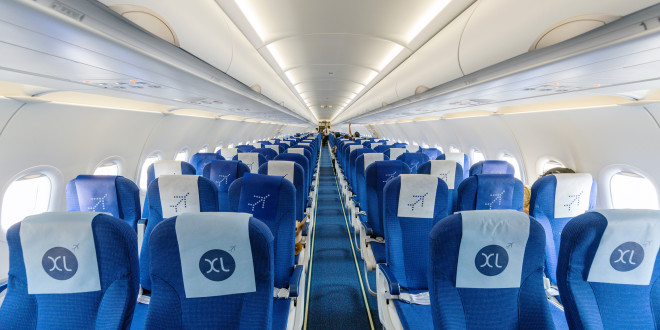 IndiGo follows Go Air. To increase its A320neo seating to 186.

The Space-Flex module moves the two rear bathrooms in to the rear of the plane, next to the galley area and provides for an additional row of six additional seats in the place of the re-located lavatories.


IndiGo will implement the change from the delivery of next A320neo VT-ITZ expected to be delivered shortly.

Version 1 (v1) of the module was first fitted on the A320s of Spanish low cost carrier Vueling. (Photo below).

The following images show the Space-Flex V2 concept in detail. In the video below Marc Mueller, Marketing Director for Airbus, shows a full model and explains how the concept works.

Very simply, in the same size and weight bracket of aircraft an additional six passengers are accommodated. For the same airport landing and parking charges, IndiGo gains an additional three per cent of capacity, FOR FREE.

There are two draw-backs to the new Space-Flex cabin. First the lavatories are now really small. Second, there are no windows on the new row 31 and it will be a little cramped. So avoid it if you can.

A electronics and automotive product management, marketing and branding expert, he was awarded a silver medal at the Lockheed Martin innovation competition 2010. He is ranked 6th on Mashable's list of aviation pros on Twitter and in addition to Bangalore Aviation, he has contributed to leading publications like Aviation Week, Conde Nast Traveller India, The Economic Times, and The Mint (a Wall Street Journal content partner). He remains a frequent flier and shares the good, the bad, and the ugly about the Indian aviation industry without fear or favour.
@BLRAviation
Previous Inflight Review: Air India: Business: 787-8: Ahmedabad – London – New York
Next Lufthansa unveils business class seat for it’s 777x