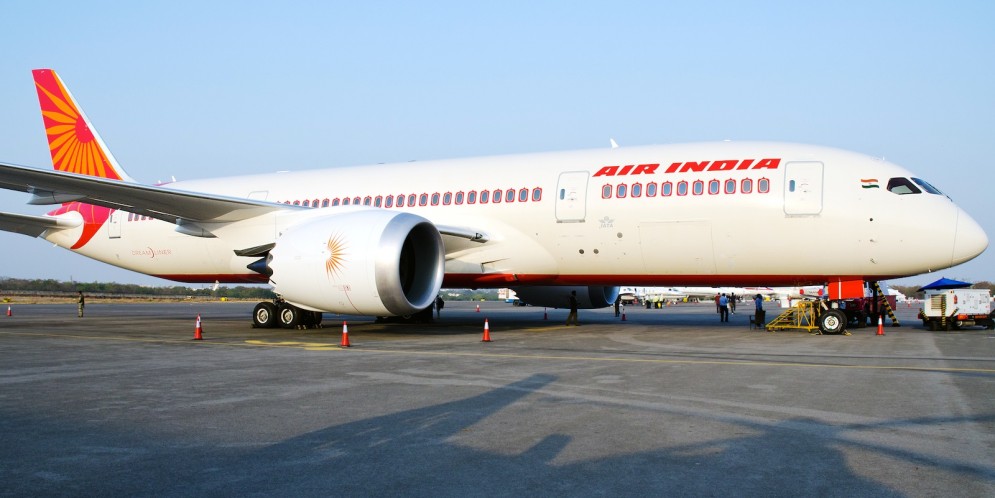 After being escorted back to the terminal by one of the transit hotel staff. With the way my luck was running this trip, I decided to double check that my bag were through checked to London. I went up to the business class counter in the check in hall which is an odd experience, because the entrance of the counter queue is closed off and you have to ask the staff next to it to open the barrier to let you through.

After getting to the counter, the agent confirmed that my bag was through checked to London and also replaced my boarding pass with a fresh one so that I wouldn’t have any other issues through security and immigration.

Heading to security I looked for the fast track line for premium passengers however I could not find it. And seeing the very short line in regular security, I didn’t bother looking very hard for it.

I rejoined the same immigration line as a few hours earlier and was quickly let through without any delay. Now would that have been so difficult a few hours ago?

After clearing immigration (finally), I headed to the GVK Lounge. (Read my review of the lounge).

When I reached the gate at 0535, there was already a massive queue for boarding. The gate agents were yelling out boarding zones but were allowing everybody through irrespective of their zone anyways. The first gate agent I asked said there was no priority boarding and I didn’t see a line for one. After joining the back of the line, I noticed a couple of passengers showing their boarding cards to another agent and being let through around the front of the line. I followed them and was let through immediately after having my boarding card and passport checked.

After crossing through, I realized that the aircraft hadn’t begun boarding and that we were just being let into a holding area. So I do not understand why they were even calling boarding zones to let passengers into the gate hold area?

There was a mad rush at the beginning of the aero bridge because most passengers were under the impression that the aircraft was boarding.

When boarding finally began, the gate agents at the aero bridge started calling priority boarding but because of the crowd in front of the aero bridge, I saw many passengers with children having to push and squeeze their way through and there was no queues marked for boarding lines. I waited till regular boarding began and the crowd thinned a little before getting into the queue.

For some reason Air India uses only one door to board the entire aircraft, even though they were at a wide body gate with two aero bridge contacts.

Before entering the aero bridge my passport and boarding card were rechecked and as is the norm the stamp on the boarding pass was checked by the CISF guard.

Halfway down the aerobridge, there were two Air India guards double checking the stamps on the boarding pass. The guards were rude and just causing a jam. And I’m very sorry Air India, but I trust the CISF with my security so if they feel it’s all clear after their person does a final check then I’m not sure what your extra guards are supposed to be doing?

After boarding, the cabin crew at the door asked me for my boarding pass and then led me to my seat. This was the beginning of the good and warm service that I would receive throughout the flight. I quickly took my seat and got comfortable. Air India has their 787’s configured with three rows in the business class cabin in a 2-2-2 configuration. Only the passengers sitting in the window seats do not have direct aisle access.

The seat is sufficiently wide at 22 inches and the cushion is soft and comfortable. There is a lot of legroom when the seat is upright and the seat relines into a full flat bed which I found long enough to lie down comfortably. However when fully flattened the seat forms three ridged sections which is not very comfortable to sleep on. The seat also has no cubby holes or convenient storage spaces to keep little things.

Again while this cabin was not as run down as the A319 on my flight from Bangalore, it wasn’t in the best of shape. The seats had a slightly worn look but everything was functional. Some things like the broken displays on the remote make the entire setup look very shabby unfortunately.

Shortly after I was seated, one of the crew brought me an amenity kit and asked if I would like a Mojito or an orange juice. Air India’s so called amenity kit leaves a bit to be desired, the kit comes with just some socks and eyeshades in a paper envelope which isn’t cool. But I did like the hotel slippers, it made it easier to walk around the aircraft during the flight later without having to put my shoes back on each time.

I was also served my Mojito with a glass of water as requested. The Mojito was a horrible combination of sugar syrup and mint which I just couldn’t drink. I was also given a nice leather folder with the menus in them.

While the aircraft was preparing to depart, I started fiddling around with the IFE. Unfortunately the IFE is another point which leaves a lot to be desired on Air India. The IFE interface is slow and the UI is ultra modern if the year is 1995. The system however had a adequate but not extensive selection of movies to select from.

The map page showed a useful series of maps and data, but used an irritating cursor system that had to scrolled around the screen to get anything done. 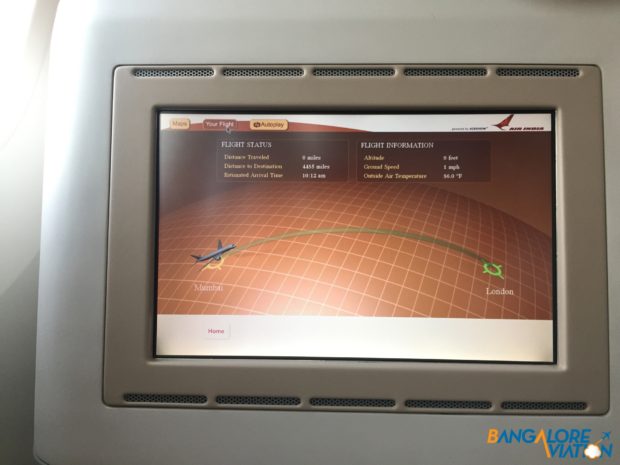 As the aircraft pushed back, the safety video was played and again the announcement warning passengers not to sit on the armrests. The flight took off on schedule and quickly climbed to it’s cruising altitude.

About 15 minutes after the flight took off, the crew asked if I would like breakfast and what my choice would be. I chose the masala omelette and was served very quickly. The breakfast was brought and served to me on a tray. The breakfast was very good with the eggs, sausages and potatoes being extremely flavorful and well cooked. The fruits were also good and I enjoyed the aam (Mango) yogurt.

My tray was quickly cleared and I took the opportunity to grab a couple hours sleep to help get me onto European time.

When I woke up, I found most of the cabin in darkness and that a bottle of water had been placed next to my seat for when I woke up – which is a small touch I really appreciate but not many airlines do. After drinking my little bottle of water, I wanted some more water so I hopped over my row mate and headed to the galley.

As I reached the galley, I was met by the cabin steward who handed me a bottle of water before my asking. When I asked him, he said he saw me finish the bottle near my seat and was just on his way to my seat with the fresh bottle.

About five hours into the flight, the crew began a drinks service, first serving two types of nuts in bags on a plate. (And as always with nuts in bags, we remember Korean air). A drinks cart was then brought around and service began. I asked for a glass of champagne, Air India serves H. Blin Brut.

On a lighter note, when I asked the steward if I could see the bottle, he gave it to me and offered to leave the entire bottle with me. I think he was serious and I politely declined.

A little while later, the lunch service began and I chose the Achari Murg, which was served with rice and a vegetable gravy. A salad, yogurt and three breads (garlic toast, a bread bun and a Roti (Indian bread)) were served on the side. The main dish was good but the salad, and all the breads were sub par.

After the dishes were cleared, a cheese and desert cart was brought out and after asking my choices, I was served a piece of smoked cheese and chocolate cake. The cheese was not very good, but the chocolate cake was excellent, dark, rich and not overly sweetened. During the service the crew always made sure everyones glasses were full, quickly refilling them as soon as they went below half. 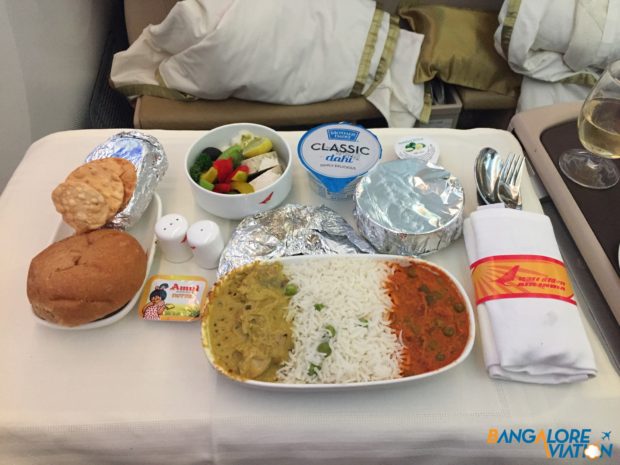 Overall the meal service was very good. The service was also warm and efficient but needs improvement in it’s finesse. It doesn’t feel like a five star hotel experience but more like lunch at a friends house with their parents making sure you eat well. While I actually enjoyed the atmosphere, I’m sure many would find it intrusive and unrefined.

The rest of the flight was uneventful and we landed at Heathrow on time after flying a couple of the customary circuits. We reached our gate reasonably fast and parked between two Airbus A380’s at terminal 2. While leaving the aircraft, I was handed a piece of paper inviting me to use the fast track service. Again this is a point that could use some finesse, the fast track invite just seemed to look and feel like a photocopy of a fast track card that was once printed. The same thing on a small card stock would make a world of a difference.

This was a flight I had dreaded, with Air India’s reputation I honestly expected to be in for ride to hell. I was very happy to be proven wrong, the flight was a decent business class experience and I arrived happy and rested.

The service on the flight was warm and the airline has all the potential to deliver world class service. Air India desperately needs to fix the little things like the hopeless amenity kits, the cheap fast track passes, etc. As on my domestic leg, the cabin upkeep has to be improved, broken controllers and worn out seat belts are not acceptable on a premium product.

The airline also needs to look into it’s transit connections and make sure that passengers can actually transit between flights without a big hassle. Boarding procedures also need to be looked into.

In the end the flight was positive. I will be flying Air India again to the US later this year and am now looking forward to a good flight.