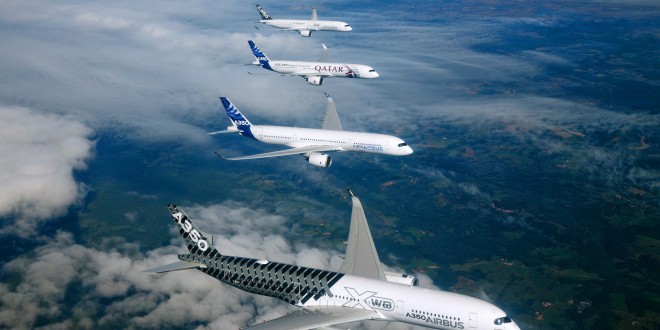 All five aircraft of the A350-900 test fleet in formation flight. Image courtesy Airbus.

US airframer Boeing out out this press release in the on-going trade spat between the United States and the European Union on subsidies by respective governments to both Airbus and Boeing.

It is known that both governments provide aid to their respective aircraft manufacturers one way or the other. The EU does it more directly, while the US does it indirectly. We at Bangalore Aviation are not taking sides. Both companies make great products. In this instance we are just reporting the news.

WTO Confirms EU Failed to Comply with Historic Rulings Against European Subsidies to Airbus, Condemns Additional Launch Aid to A350

– Sept. 22 WTO ruling confirms the EU failed to comply with its obligation to remedy $17 billion in illegal launch aid and other subsidies
– WTO also finds that Airbus received new illegal subsidies for the A350, which are reported to be almost $5 billion
– Ruling sets the stage for the United States to seek up to $10 billion in annual retaliatory tariffs on EU imports

A World Trade Organization compliance panel today ruled that the European Union has failed to comply with its obligation to remedy the massive subsidies European governments have provided to create and sustain Airbus for more than 40 years.

Rather than comply with their WTO obligations to remedy the $17 billion in past subsidies provided to Airbus, the WTO found that EU Member States provided Airbus with new illegal launch aid – reportedly almost $5 billion – so they could launch the new A350. The WTO was explicit: “[I]t is apparent that the A350 XWB could not have been launched and brought to market in the absence of LA/MSF [Launch Aid].” The WTO previously found that essentially no model of the entire Airbus fleet would exist today – including the A300, A310, A320, A330, A340 and A380 – were it not for the illegal subsidies provided by the European governments.

“Today’s historic ruling finally holds the EU and Airbus to account for their flouting of global trade rules,” said Dennis A. Muilenburg, Boeing chairman, president and CEO. “This long-awaited decision is a victory for fair trade worldwide and for U.S. aerospace workers, in particular. We commend the administration, specifically the Office of the U.S. Trade Representative, and the U.S. Congress for their unwavering commitment to this matter and to enforcing global trade rules,” he said.

“The World Trade Organization has now found that Airbus is and always has been a creature of government and of illegal government subsidy,” said Boeing Executive Vice President and General Counsel J. Michael Luttig. “The day of reckoning for launch aid has finally arrived. Prior WTO rulings found that Airbus itself likely would not even exist without illegal launch aid, equity infusions, and infrastructure support. Today the WTO went further and found that Airbus’ existence continues to depend upon illegal, trade-distorting government subsidies in the form of launch aid, most recently for the A350 XWB – which reportedly totals almost $5 billion,” he said.

Luttig explained that under prior WTO rulings the EU had an obligation to remedy the subsidies for its past airplanes, including the A380. “Instead, the EU compounded the illegal practice by giving Airbus additional launch aid for the A350 XWB. After any appeal of today’s compliance ruling, the next step for the U.S. government is to obtain WTO authorization to impose billions in retaliatory duties. The U.S. government has previously calculated those to be up to $10 billion annually.”

Today’s ruling confirms that Airbus both failed to withdraw old subsidies and instead put in place new subsidies for a grand total of almost $22 billion (principal amounts only). That includes $15 billion in launch aid for each Airbus commercial aircraft program from the A300 through the A380, and $2 billion in non-launch aid subsidies. The WTO also ruled for the first time that Airbus received illegal launch aid for the A350 XWB. News reports put the total for that program at almost $5 billion. Echoing prior rulings, the WTO panel also found that Airbus and its current product line likely would not even exist without launch aid.

“No form of government support compares to launch aid – in terms of amount, nature, or effects,” Luttig said. “Launch aid created entire aircraft programs – indeed, an entire aircraft company – as the WTO found today. This is a type of government support that the WTO has found, over and over again, to be unequaled both in nature and amount, unfair to Boeing and United States workers, and flatly illegal under global trade rules. Today’s ruling confirms that these illegal subsidies will now end.”

Luttig stressed that the final stages of the case against Airbus subsidies are independent of the European cases against the United States and that the EU needs to act now. “The cases are separate and distinct,” he said. “The EU lost this compliance case for the simple reason that it did nothing to remedy its massive subsidies which have had profound effects on the commercial airplane market. Whatever happens in the European cases against the United States, launch aid and other illegal government support for Airbus will now come to an end.”

A electronics and automotive product management, marketing and branding expert, he was awarded a silver medal at the Lockheed Martin innovation competition 2010. He is ranked 6th on Mashable's list of aviation pros on Twitter and in addition to Bangalore Aviation, he has contributed to leading publications like Aviation Week, Conde Nast Traveller India, The Economic Times, and The Mint (a Wall Street Journal content partner). He remains a frequent flier and shares the good, the bad, and the ugly about the Indian aviation industry without fear or favour.
@BLRAviation
Previous Tata-Lockheed Martin delivers 50th C-130J empennage
Next Qatar Airways to be the first airline to meet ICAO 2021 flight tracking