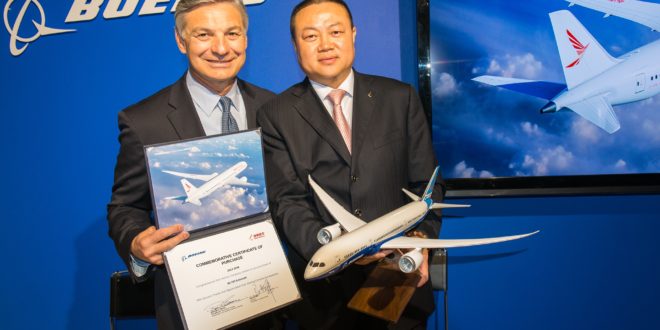 Yunnan based chinese carrier Ruili Airlines announced today at the third day of the 2016 Farnborough International Airshow the finalization of an order for six 787-9 Dreamliners. The order which is valued at $1.59 billion at current list prices, is the first widebody order for the Yunnan-based carrier.

“With our base in Yunnan province, Ruili Airlines is positioned to help build Yunnan as the gateway between Southwest China and the rest of the world,” said Ma Zhanwei, Chairman, Ruili Airlines. “The right size, long range, competitive fuel efficiency, as well as passenger appealing edge of the 787-9 make it an ideal fit in facilitating our international expansion plans.”

Chairman Ma also indicated that the airline is close to opening it’s own training facility to train pilots, maintenance engineers and other staff.

The order is subject to final approval by the Chinese government after which it will be added to Boeing’s order book.