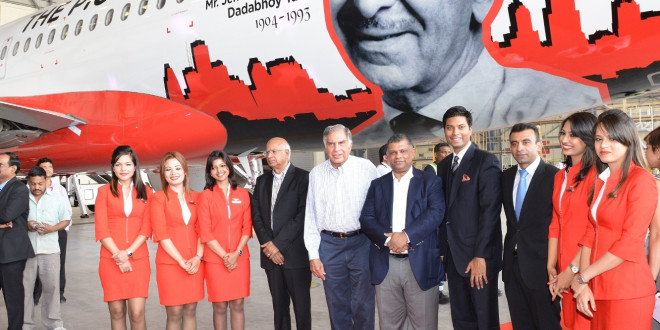 Devesh Agarwal March 28, 2016 AirAsia Comments Off on Tatas and its nominee Directors to take majority stake in AirAsia India

Tata Sons Limited and its nominated Directors Mr. S. Ramadorai (Chairman) and Mr. R. Venkataramanan, have together entered in to an agreement to take over the stake of Arun Bhatia promoted Telestra Tradeplace Limited in Air Asia India Limited, to gain a majority stake in the airline.

Air Asia India is a joint venture promoted by Tony Fernandes promoted AirAsia Berhad of Malaysia, the Tatas and Telestra.

Tata Sons proposes to increase its stake by 7.94% in the airline to 49% from its existing stake of 41.06%, by acquiring equity from Telestra. Ramadorai and Venkataramanan, in their individual capacity, propose to acquire 0.5% and 1.5% shareholding respectively of Telestra’s remaining 2% equity stake. AirAsia Investment Ltd. will continue to hold its 49% stake in the ariline.

The agreement was entered into on March 14, 2016, and the transaction is proposed to be completed in April, 2016, subject to completion of the relevant corporate approvals and processes.

A electronics and automotive product management, marketing and branding expert, he was awarded a silver medal at the Lockheed Martin innovation competition 2010. He is ranked 6th on Mashable's list of aviation pros on Twitter and in addition to Bangalore Aviation, he has contributed to leading publications like Aviation Week, Conde Nast Traveller India, The Economic Times, and The Mint (a Wall Street Journal content partner). He remains a frequent flier and shares the good, the bad, and the ugly about the Indian aviation industry without fear or favour.
@BLRAviation
Previous Jet Airways shuts Brussels hub; to evacuate stranded passengers today
Next Jet Airways begins operations from Amsterdam