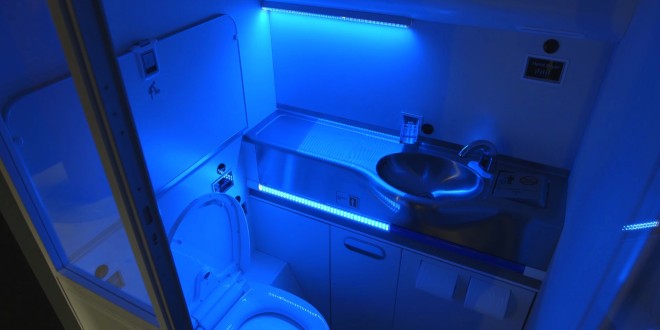 The cleaning system which can be activated after each use, will disinfect all the surfaces using Far UV light. Far UV is safe for humans and is activated only when the toilet is unoccupied. The UV light is combined with ‘touchless’ features, like auto-activated taps and soap dispensers, to minimize the growth and potential transmission of micro-organisms. Boeing has filed for a patent on this concept.

“In the prototype, we position the lights throughout the lavatory so that it floods the touch surfaces like the toilet seat, sink and countertops with the UV light once a person exits the lavatory. This sanitizing even helps eliminate odors.”

The cleaning system, which will need further study before it can be offered to airlines, would lift and close the toilet seat by itself so that all surfaces are exposed during the cleaning cycle. The design also incorporates a hands-free tap, soap dispenser, dust-bin flap, toilet lid and seat and hand dryer. Boeing is also studying a hands-free door latch and a floor level vacuüm vent system for maximum hygiene.

The prototype is a finalist for a Crystal Cabin Award that will be announced at the Hamburg Aircraft Interiors Expo on April 5.

Can Boeing extended the auto lift and close of the commode to solve the perennial point of friction between women and men? Share your thoughts via a comment?

A electronics and automotive product management, marketing and branding expert, he was awarded a silver medal at the Lockheed Martin innovation competition 2010. He is ranked 6th on Mashable's list of aviation pros on Twitter and in addition to Bangalore Aviation, he has contributed to leading publications like Aviation Week, Conde Nast Traveller India, The Economic Times, and The Mint (a Wall Street Journal content partner). He remains a frequent flier and shares the good, the bad, and the ugly about the Indian aviation industry without fear or favour.
@BLRAviation
Previous United announces full-time return of president & CEO Munoz
Next GoAir relocates all Mumbai operations to Terminal 1B